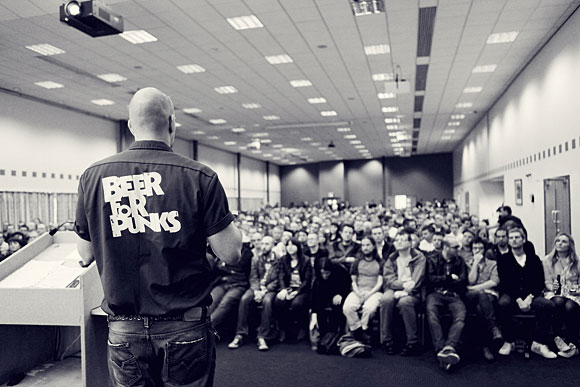 IT’S not often an AGM features beer tastings, live music and gourmet burgers.
But that was the festival atmosphere that greeted investors in Brewdog when the rapidly-growing craft brewer and pub operator held its AGM in Aberdeen on May 1.
The event marked the first annual meeting for the army of Brewdog’s ‘fanvestors’ who took stakes in the business via its Equity for Punks scheme.
The successful share scheme closed in January after raising £2.2 million from 5500 beer fans.
Brewdog, which opened its latest bar in Manchester earlier this month, said the AGM allowed it to thank investors and celebrate its fifth anniversary.
Co-founders James Watt and Martin Dickie took questions from what’s said to have been 2000 delegates at Aberdeen’s Exhibition and Conference centre and there was live music from Tommy Reilly, The Little Kicks, Bombskare, Fatherson and Kassidy; BBC Radio One’s Ally McCrae compered.
Brewdog now employs 85 staff and has an annual turnover of £10m.
Watt delivered a suitably anti-corporate verdict on the event.
“AGMs are usually full of suits, Powerpoint presentations and bad coffee, but we’re not Barclays Bank – we want to do things our way,” he said.
“The 2012 Punk AGM gave our new Equity for Punks shareholders an insight into the business and how we’re progressing, but it also gave them a chance to celebrate their investment and feel part of the craft beer revolution.”
Meanwhile, Brewdog marked the launch of its seventh bar in Manchester by offering its now customary ‘crap beer amnesty’.
For one day only, the firm offered locals the chance to swap a can of ‘mainstream branded lager’ for one of its ‘artisanal canned, bottled or draught beers’. Again in typical style the firm has pledged to recycle the mainstream lager cans once it has ‘blown them up’.
The 250-capacity bar, based on the city’s Peter Street, has 12 draught taps and stocks beers from ‘world-renowned craft breweries’, including Stone, Three Floyds, Mikkeller, Alesmith, The Bruery and De Dolle. Its latest opening joins an estate that includes bars in Aberdeen, Glasgow, Edinburgh, Newcastle, Nottingham and Camden, London.