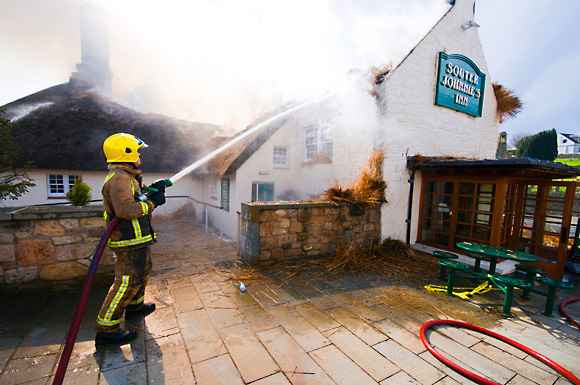 AN Ayrshire inn at the centre of Costley & Costley’s House of Burns retail development has been gutted by fire.

More than 30 firefighters worked through the night to tackle the blaze at Souter Johnnie’s Inn in Kirkoswald, which had ripped through the venue’s thatched roof.
Strathclyde Fire & Rescue confirmed it was called to the scene at 12.10pm on April 18 and, due to the size of the blaze, used aerial rescue pumps to tackle the fire from above.
Souter Johnnie’s Inn occupied a building which was once a school attended by Robert Burns and formed part of Costley & Costley’s House of Burns development, which includes a gift shop, tearoom, food hall and patisserie.
In a statement, owners Bill and Cath Costley said: “We are deeply touched by the overwhelming offers of help and all the kind messages we have received.”
An investigation into the cause of the fire is underway.