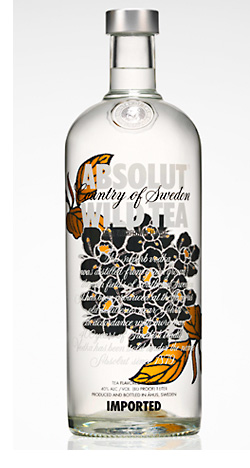 A NEW flavour has been added to the Absolut flavoured vodka range in time for summer.

Absolut Wild Tea is said to combine the “dark tones and richness” of black oolong tea and the “delicate character” of Nordic white elderflower with a “smooth, mellow” vodka base.
The bottle is embossed with a black and gold tea leaf design.
The latest Absolut flavour joins a range that now numbers nine, following the launch of Mango and Berri Acai last year.
Ian Peart, on-trade channel director for spirits at Pernod Ricard UK, told SLTN the latest variant will be available in top-end bars, with the Absolut Wild Tea Negroni and the Absolut Wild Smokey Tea promoted as suggested serves.
“We’re continuing to invest in pioneering flavours,” he said.
“Globally, a lot of top-end bartenders are working with infusions and a lot of them are infusing vodka with tea so we’re capitalising on that trend.
“The flavours can be used to make great-tasting drinks and cocktails.”
The launch of Wild Tea comes as Absolut launches Absolut Elyx – a single-batch vodka – in five of London’s top cocktail bars.
Elyx, which is said to be produced in a hand-operated still dating from 1929, will be rolled out to top-end bars across the UK from next month.