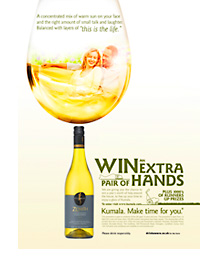 The ‘win an extra pair of hands’ promotion gives Kumala drinkers the chance to win a range of different prizes, including Amazon Kindles, gift vouchers and magazine subscriptions.
25 consumers will win the competition’s grand prize – help around the house for a year.
The campaign is running in consumer publications such as Heat, Closer and The Guardian Magazine, as well as in-house titles including Sainsbury’s Magazine.
“We wanted to reward our consumers by encouraging them to take a step back from the hustle and bustle of life, and to ‘make time for you’,” said Paul Hillier, marketing controller at Kumala’s parent company, Accolade Wines.