SOMETHING wasn’t quite the same as we entertained guests at the Caley Brewery last month before Edinburgh’s rugby match against Toulouse. A man who would very much have been in his element on occasions like this was conspicuous by his absence.

Alan McBurnie loved nothing more than bustling around the sample cellar, making sure the beer was perfect and people enjoyed themselves. Nothing was ever too much trouble for him and he didn’t relax until the last customer had left and everything was tidied up. 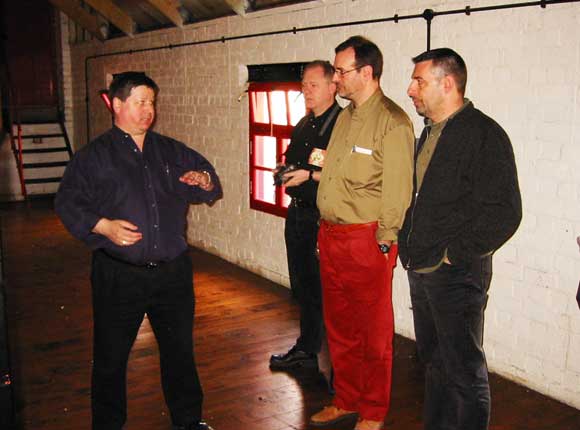 Alan would also have loved seeing Edinburgh beating Toulouse too, especially before a record UK crowd.
We have often said a book should be written about Caledonian’s renaissance since 1987.
There are so many stories to share, so many great characters involved. Alan was up there with the best.
Alan started in the trade in the Miners Welfare Institute in 1976 before running a pub called Springbank Cottage in Maryhill, Glasgow, for two years in the early nineties.
He then joined Broughton Brewery in sales on August 24, 1992.
I had moved to Scotland in July 1993 and I kept bumping into this bubbly, effusive little guy from Glasgow who was really into the trade and cask beer.
He was so enthusiastic he made a real impression on me.
In 1995, when Broughton went into receivership and Caledonian tentatively looked into acquiring it, I met Alan several more times.
When I heard the new owners had made Alan redundant, I rang him that day and arranged to meet him with Craig Frood at a Little Chef in Kirkintilloch.
That meeting confirmed my view that Alan was ideal for Caledonian.
He started right away, taking on the west of Scotland, and so began the strong bond between him and the brewer that lasted to the end.
Although he started in sales and there was a sales aspect to his role, his background as a publican meant he had a huge empathy with the Scottish licensed trade and as a result he developed quality and cellar training for Caledonian, which reached as far south as Kent.
Over the years, Monday nights at Caledonian became Alan’s domain.
He has educated several thousand people in the art of the cellar and enthused even the most die-hard students.
Eventually ABCQ (Award in Beer and Cellar Quality) accredited, his courses were renowned and have truly been fundamental foundations for the success that cask beer has enjoyed over the last 15 years north of the border.
The Caledonian Beer Festival was instrumental to Caledonian’s growth and by the time it finished in 2004 Alan was in charge of the huge temporary cellar.
Due to the expansion at Slateford Road, there was sadly no room for a beer festival and we had to expand our sampling off site.
But Alan’s dedication to training and passion for the beers meant he was the person chosen to look after the bar side of events outside the brewery.
Alan loved this. He trained the bar staff, set up bars and ensured the event experience was enhanced by excellent cask beer.
Alan’s events experience expanded his sporting horizons – he even saw the light and got to like cricket!
A few years earlier Alan was instrumental in helping make Glasgow rugby’s Friday nights at Hughenden fantastic fun.
The Caledonian bar was a very popular addition to the venue.
Alan’s love for the team maybe rivalled his other Glasgow sporting passion, Rangers, at times!
With his Caledonian hat on, Alan was possibly at his proudest at the Great British Beer Festival. He loved the fact Caledonian could display its range on such a stage.
Alan’s smile is the last thing I saw as I left the hospice when I went to see with him Craig Frood, David Brown, and Chris Miller on March 23.
The five of us had a real laugh – it was a real privilege to spend those last minutes with him.