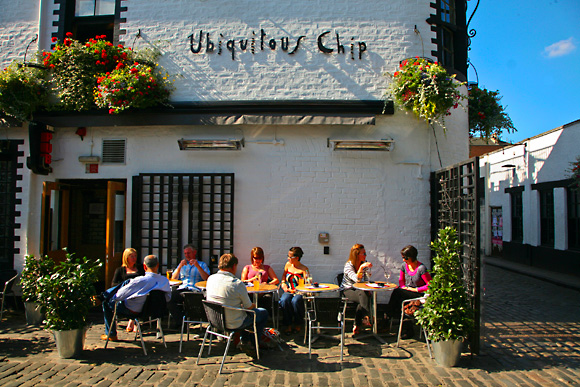 A GOURMET cheese dinner, a whisky blending competition and a ‘reading on the roof’ – these are some of the quirky food and drink events lined up for the inaugural May Feast at the Ubiquitous Chip in Glasgow.

The six-day event, which starts on Saturday May 19, is designed to highlight the venue’s commitment to using local produce – an enduring principle of the restaurant since it opened in 1971 and at sister venues Stravaigin and Stravaigin 2.
Speaking to SLTN last week Carol Wright, who co-owns the business with Colin Clydesdale, said staging special food and drink events is nothing new for the Chip or Stravaigin.
But she said the May Feast is one of the biggest to date.
Working with around 20 different producers and suppliers, the operators and staff have put together a programme of events which aims to offer something for everyone.
May Feast kicks off at the Chip on Ashton Lane on Saturday May 19 with a real ale festival, featuring ten beers from five Scottish breweries (Fyne Ales, Loch Lomond Brewery, Sinclair Breweries, Houston Brewing and Kelburn Brewery).
The following day, the Black Bottle Blending Game will see a representative from Burn Stewart Distillers let guests in on some of the secrets to whisky blending.
Afterwards, customers will have the chance to sample their own dram with the Chip’s 1971 haggis, neeps and tatties. 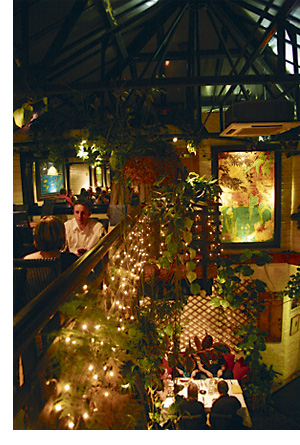 On Monday May 21, Chip customers will be tested on their culinary knowledge in a special edition of its monthly quiz, before the Chip stages its first gourmet cheese dinner on May 22. For £25 per person, customers can enjoy a three-course meal featuring a range of cheese and a half carafe of wine.
The following day, the Chip’s roof terrace will stage ‘a reading on the roof’ – a German sausage barbecue accompanied by wheat beer Weihenstephan Kristall and a reading from Franz Kafka’s The Metamorphosis.
May Feast will be brought to a close with a Portuguese wine dinner, hosted by the Chip’s head sommelier Richard Masterson.
Carol said the event aims to build on the success of The Chip’s February Fringe, which featured literary and comedy nights, although she admits it’s not always easy to predict how consumers will respond.
“It can be a bit trial and error,” she told SLTN.
“When we did the February Fringe, I was slightly unsure about the literary night – I thought the comedy night would be the busiest but it was the other way round.
“The barbecue on the roof is kind of out there but we thought we would throw it in there; you never know.
“The main thing is each of the events gives people a chance to learn about food and drink in a way that’s not intimidating or pompous; we don’t want them to be analysing every bite.”
Aside from the main objectives of boosting turnover and attracting potential customers, the event has given the Chip’s 70 staff a boost, according to Carol.
“It gives everyone in the building a chance to showcase their ‘bit’,” she added.
“From the kitchen staff showing off their skills to the food and drinks knowledge front of house – it’s a really good way to galvanise the staff.
“They have all been involved in the planning and given their input so they all ‘own’ it and want it to be busy and successful.”

May Feast at a glance