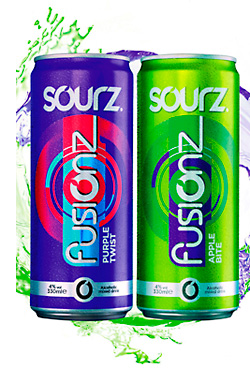 LIQUEUR brand Sourz has branched into new territory with the launch of its first ready-to-drink product.

Sourz Fusionz is said to bring together the “bold, zingy flavours” of its parent brand in a “lightly sparkling” RTD format. It’s available in two variants: Apple Bite and Purple Twist.
Available initially in 330ml cans, the new 4% ABV drink was due to be rolled out across the on and off-trades in 275ml and 700ml bottles from this month.
Eileen Livingston, marketing controller for Sourz at distributor Maxxium UK, said Fusionz was launched in response to “growing consumer demand for new taste and flavour experiences”.
“With over half of Sourz consumers drinking RTDs, we know the time is right for us to introduce our new addition to the Sourz family,” she said.
“The refreshing flavour combinations and lightly sparkling, ready-to-drink format provide a whole new twist on the Sourz experience, bringing the Sourz brand into different consumption occasions.
“The launch of Sourz Fusionz marks another exciting year ahead for the brand and we can’t wait to share it. It’s a significant investment that will reinforce our flavour credentials and further enhance Sourz growing awareness, trial and loyalty amongst consumers.
“Ultimately, it’s a strategic part of Sourz’s ongoing plans to accelerate year on year growth, reinvigorate the RTD category and maintain our position as category leader.”
The launch of Sourz Fusionz marks the beginning of the new ‘Get Sorted For…’ campaign, which will include a TV ad and sampling campaign.