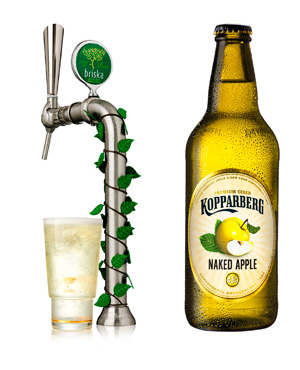 IT’S apple cider, but not as we know it.

Kopparberg, the fast-growing Swedish brand known for its pear and fruit-flavoured ciders, is looking to boost market share with the launch of a new apple cider.
Replacing the brand’s existing, sweeter apple cider, Kopparberg Naked Apple comes as research from Mintel suggests there is room for growth in drier ciders.
Listings for the new variant, which will be available in 500ml bottles (ABV 4.5%) from May 1, have been secured with wholesalers including Wallaces Express and Inverarity Morton, as well as pub groups Belhaven, Fuller Thomson, Mitchells & Butlers, Enterprise Inns and Punch.
Rob Calder, head of marketing at owner COS Brands, said he believes Kopparberg Naked Apple offers genuine innovation in an increasingly crowded market.
“It’s not about trying to copy Magners – it still has the Kopparberg taste but is much less sweet than the apple flavour we have at the moment,” he told SLTN.
“In Sweden, Naked Apple is called Dry, but it’s not dry in UK terms.
“It still has a light, sweet taste and it’s different to what’s on the market.
“While there’s been so much innovation on fruit lately, apple has seen very little new news. We’re bringing what people like about fruit cider to a more male audience.”
Calder added that research commissioned by COS ahead of the launch revealed that over 70% of cider drinkers were open to trying a new apple cider, and that it has tasted positively against Magners and Stella Cidre.
And he revealed the launch would be supported by a brand new television ad, due to air in the middle of May.
“It’s a brand ad but Naked Apple will be the ‘hero’,” he said.
“It’s the first major TV ad we will have done with a variant focus.
“Fruit is still a big part of what cider is about. We think this adds to the category. Although Mintel [research] suggests there is still room for fruit cider to grow, which is great, we don’t want innovation to focus only on fruit.
“This will bring news to ‘apple’ and hopefully bring more consumers to the apple cider category.”
Meanwhile, fellow Swedish brand Briska has launched a nationwide sampling campaign as it looks to build its own on-trade footprint.

It still has a light, sweet taste and it’s different to what’s on the market.

The brand, which was launched in the UK in September, is available in draught format, as well as in 330ml bottles. Distributor Proof Drinks said more than 300 independent venues currently stock the draught format, with the packaged range of Pear, Apple and Pomegranate flavours also proving popular. Wholesale stockists include Waverley TBS and Matthew Clark.
Frederik Eklund, export manager at brand owner Spendrups, said that with Briska now stocked by venues across the UK, product trial will be key for the brand moving forward.
“The reaction from UK consumers to Briska’s fresh, fruity and more natural taste has been incredible,” he said.
“By mobilising Proof’s existing nationwide sampling team, we are going to sample to tens of thousands of UK consumers this spring and let our cider’s taste speak for itself.”