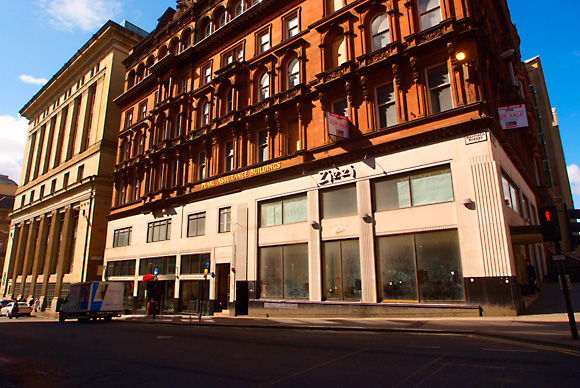 SCOTLAND’S largest city has been chosen as the location for a new Thai restaurant and a new hotel following the conclusion of two major property deals last week.

The Pearl Assurance Building, on the corner of West George and Renfield Streets, is set to be transformed into a 90-bedroom Park Inn hotel following its acquisition by developer Hotel Land & Development (Glasgow) Ltd. It was sold from an asking price of offers over £4.75 million.
Meanwhile Thai restaurant group Chaophraya will make its first foray into Scotland with an outlet in Buchanan Street’s Townhouse building.
The group, which has outlets in Birmingham, Liverpool, Leeds, Manchester and Sheffield, acquired a 20-year lease on the building in a deal brokered by CBRE.
Chaophraya plans to carry out a £2 million revamp of the site before opening this summer, and has revealed it will feature a restaurant with open-plan kitchen as well as a bar and private dining areas.
Operations director Ian Leigh said the move represents a “real milestone” for the company.
“We have very ambitious growth plans and a key part of that expansion includes rolling the brand out throughout Scotland,” he said.
“In fact, we are already looking at sites in Edinburgh and further north.”
Meanwhile, work to convert the Pearl Assurance Building, already partially developed for leisure use, is set to continue.
One of the building’s ground floor units is occupied by a La Tasca restaurant and there’s currently a vacant spot for a bar/restaurant, which previously traded as Zizzi.
“The sale of this property is great news as we understand the developers will be continuing with the comprehensive refurbishment of the hotel element to form a 90+ guest room Park Inn,” said Keith McBain, associate director of Jones Lang LaSalle. JLS handled the sale on behalf of KPMG, administrators of West George Street Properties.