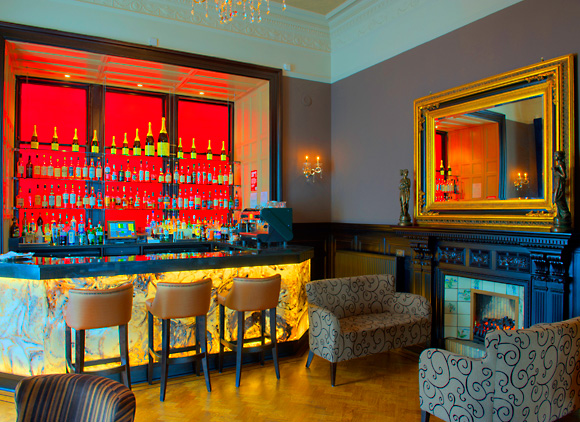 EDINBURGH’S Dunstane House Hotel has been given a new look, blending the building’s Victorian features with contemporary design.

Owners Shirley and Derek Mowat, who bought the hotel in 1998 – after discovering it en route from their native Orkney to London – spent £220,000 on the overhaul of their west end business, which is located close to Haymarket station.
As part of the revamp, overseen by Shirley and completed by Dimension Works, three new bedrooms were created, taking to 35 the total between Dunstane House and its sister hotel Dunstane City, which is located across the road.
The individually-designed rooms are distinguished by their colour schemes and are described as “almost regal in style”, with four poster beds and “lavish” linens and fabrics by brands like Zoffany and Harlequin.
The hotel’s Stane Bar and Skerries Restaurant have been joined to create one open space, which is said to benefit from greater light thanks to an expansive bay window overlooking the front gardens. Original features, such as the cornicing and fireplace, have been retained, and a painting of The Ring of Brodgar in Orkney adorns one wall.
In a further nod to the owners’ Orcadian roots, old black and white photographs of the islands are displayed in the reception area, which also features a large chandelier.
Shirley said the new look, which is set to be officially unveiled later this month, has given the hotel an “air of opulence, while retaining its Victorian Country House charm and warm, welcoming atmosphere”.
“When we bought the property in 1998, we loved the Victorian architecture and classic country house feel and will always want to be sympathetic to that,” she said.
“However, we definitely felt it was time to add a touch of modern luxury, and create a sense of an open, airy restaurant and bar which made better use of light.
“We are hugely impressed by the professionalism, efficiency and dedication of Dimension Works, which undertook the work and completed it in a matter of weeks.”

We felt it was time to add a touch of modern luxury.

In other changes at Dunstane House, Skerries Restaurant has an expanded menu following the appointment of Martin Collins as head chef. The restaurant specialises in seafood and meat sourced from Scotland’s Highlands and islands.
The hotel has also unveiled its new beauty room, Revive at Dunstane, which is open to guests and the general public.
Despite the cosmetic changes, Shirley said the focus on “friendly service and excellent customer care” remains.
“You might not recognise the place when you see the gorgeous new interiors and restaurant – but we promise you’ll find the same friendly welcome that we have always prided ourselves on, and that’s one thing that won’t change at Dunstane House Hotel,” she added.