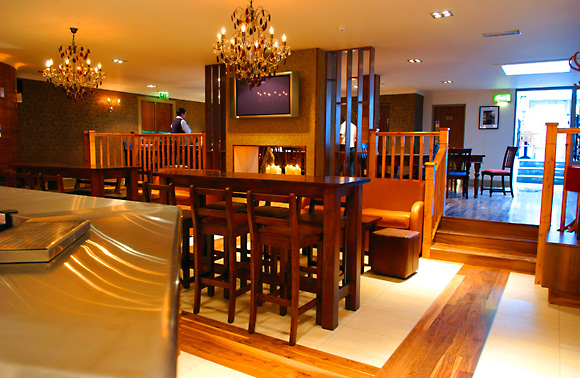 MACLAY Inns has returned to profit and turnover growth in its current financial year – after a combination of continuing recession, poor weather and increased costs hit results in the 12 months to September 2011.

The managed house operator, which runs 26 pubs across Scotland, saw operating profit fall 20% to £750,000 and turnover drop 2.2% to £10.4 million in its last full financial year.
Managing director Steve Mallon said the firm’s performance over the period had been undermined by the continuing squeeze on consumer spending and poor weather, particularly the snow and ice in the build-up to Christmas 2010, which led to a downturn in trade and extra heating costs.
The loss of festive business also led the firm to invest more in event activity in a bid to “regain some of the lost ground”.
But Mallon said the company had started its current financial year in better shape, confirming last week that profits were running 5% ahead of last year in its year to date.
“We’re poised to move forward and indeed the year is off to a better start – turnover and profit are up on the previous year as we now approach the half-year stage, ” Mallon told SLTN.
“Although those [figures] aren’t on public record that is the trend we’re seeing to come through, which is very heartening.
“Certainly further acquisitions which we now plan to make will bolster the company’s performance even further.
“With our new arrangements in place with Tennent’s and our new board composition, we’re looking to move onwards and upwards in the future.”
As reported in the last issue of SLTN, Tennent Caledonian Breweries became the main beer supplier, leading with Tennent’s Lager, Caledonia Best and Magners, to the Maclay estate on April 1. The deal will also see TCB provide funds to help the Alloa-based operator acquire new units.
Mallon said Maclay hoped to start bidding for sites soon.
“We have identified some leads pretty quickly and we’re looking to develop more by raising the profile of our acquisition campaign,” he said.
“We’re in discussion with some parties and I think we’ll be making offers within the next few weeks.”
Assisting Mallon through the acquisition process will be a new chairman, with Michael Denny having succeeded Gavin Reed earlier this month.
Denny, who has been on the Maclay board since 2010 and is a former executive chairman of NVM Private Equity, said he is looking forward to helping Mallon and his team drive the business forward.
“This is an exciting time for Maclay and I look forward to working with managing director Steve Mallon and his team as we grow the business through further acquisitions,” he said.