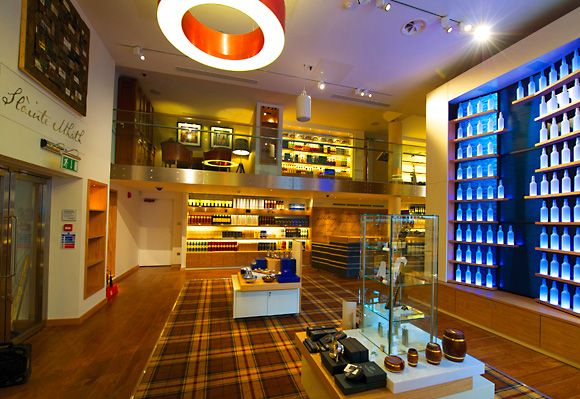 EDINBURGH’S Scotch Whisky Experience has relaunched its retail outlet following a revamp that ushered in a host of interactive features.

Using modern technology to bring the traditional elements of the industry to life, the store now offers an interactive flavour map, touch-screen distillery guide (providing information in 20 different languages) and a feature wall of TV screens.
Three iPads have also been brought in, allowing visitors in a newly-created VIP area to browse high-end whiskies using a specially-created app.
The features were installed as part of a £1 million refurbishment of the retail space – the latest stage in a multi-million pound overhaul of the whisky attraction.
The new interior – a collaboration between Leith-based design firm Bright 3D and main contractor and woodcraft specialist Laurence McIntosh – features a glass gallery, countertops made from reclaimed whisky cask ends and oak flooring. It also has a ‘pick and mix’ whisky miniature wall, allowing customers to pick a selection of miniatures which can be gift wrapped with a personalised certificate, and a whisky label montage.
The shop’s blended whiskies have their own gallery, while single malts are now organised by region (rather than distiller), allowing the range to be ‘shopped’ on the basis of regional characteristics.
Susan Morrison, director and general manager of the Scotch Whisky Experience, told SLTN the attraction was now more user-friendly.
“About 70% of our visitors are from overseas and most are novices so we’ve tried to make it more interesting for people – our core market is people who don’t know much about whisky,” she said.
“The flavour map has an axis with malts plotted on it so if customers know one brand they like, it can help them find another malt close to that brand.
“The shop has been doing really well year on year; we’ve been selling a lot of high-end whiskies to people from Russia and China so we’ve created a VIP area, which is not exclusive but is primarily for customers looking at £1000-plus whiskies. We have three iPads in there so they can read more about the whiskies – that will be a huge boon in August when the shop is busy, especially for customers whose first language isn’t English. It’s somewhere quiet for customers to sit.
“The shop is the final part of our tour so it had to flow on from that and I think it does that now.”