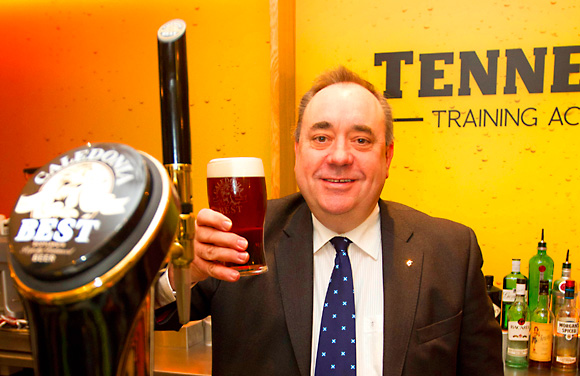 The Westminster coalition is now consulting on a proposed 40p a unit minimum price as part of its new Alcohol Strategy, raising the prospect of the mechanism being introduced on both sides of the border.
The move came after the Scottish Tories abandoned its previous opposition ahead of the stage one debate on the Alcohol (Minimum Pricing) Bill in the Scottish Parliament last month, and followed a similar U-turn by the Scottish Liberal Democrats.
Speaking exclusively to SLTN at the launch of Tennent Caledonian Breweries’ new bottling line in Glasgow, Salmond said he expects opposition to minimum pricing to fade away.
“I’m sure the range of companies will come into line as they see the momentum behind the policy,” he said.
“As far as I know politically, only the Labour Party in Scotland are still opposed to it, but Scottish Labour MPs at Westminster are supporting it in England, so I don’t think it’s going to last long.
“It’s been a fairly strong political debate to have, but I think proponents of minimum pricing have won that debate comprehensively and it’s now down to implementation.
“But we want to implement it in such a way which does the things we want – we want to cut down substantially the consumption of cheap, poor quality alcohol and in that more socially responsible environment the winners will be the people who are making and marketing good, high quality, distinctive brands.
“It also helps the licensed trade, because it puts an emphasis on socially responsible consumption of alcohol and controlled premises, as opposed to binge drinking of cheap alcohol in the house. That’s to be welcomed.”
Paul Waterson, chief executive of the SLTA, told SLTN news of the coalition’s consultation was a triumph for the trade group, and argued that it effectively killed the argument that cross-border trading would arise if a minimum price was introduced in Scotland but not in England.
But long-standing opponents to the policy showed no sign of shifting their stance. “Nothing’s changed – in principle we’re opposed,” said Campbell Evans, director of the Scotch Whisky Association. “We don’t think it will be effective in tackling alcohol misuse, we think it’s illegal and it will damage the Scotch whisky industry in the long-term internationally.”
The new bottling line at Wellpark has been described as the most advanced in Scotland. C&C Group, the Dublin-based owner of TCB, invested a claimed £4 million in the facility, which has the capacity to run 50,000 bottles per hour. The investment is said to have brought 50 new jobs.
TCB also revealed plans to move more assertively into the export market – North and South America, Australia, Canada and Italy will be chief among the markets targeted.