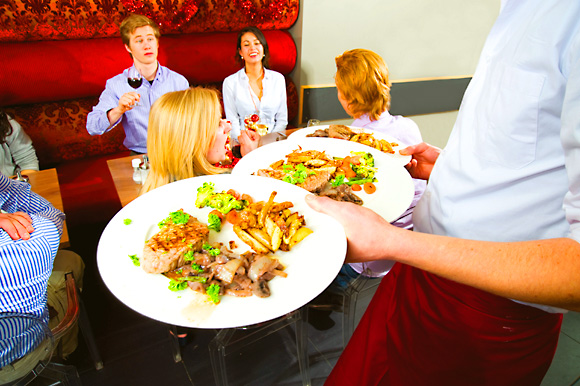 RESTAURATEURS have slammed the UK government’s decision to raise the National Minimum Wage for workers over the age of 21.

The 2012 Budget, announced last month, included an 11p an hour wage rise for workers over 21, bringing the hourly rate to £6.19, while the rate for 18-20 year olds remained £4.98 an hour. The over 21 rise will go through on October 1.
Ryan James, owner of the Two Fat Ladies restaurants in Glasgow and chairman of the Glasgow Restaurateurs’ Association, told SLTN the move would most likely lead to staff cuts. “It’s like every other time that it [changes], all that happens is that the number of staff you employ contracts, simply because you have to cut back hours so that the wage percentage comes out the same,” he said. “It doesn’t create jobs, that’s for sure.”
James claimed the rise for over 21s may cause restaurateurs to replace departing staff with part-time positions to keep costs in line.
And he argued that the frozen wage rate for 18-20 year olds would not necessarily encourage restaurateurs to hire more young workers.
“The thing you have to bear in mind is that if you’re taking on someone of that age, the amount of time and money you’re going to be spending on their training probably means that they’re actually a more expensive employee than the one that’s done that job before and is getting paid more by the hour.”
James’ comments were echoed by Maria Watson, co-owner of Gordon’s Restaurant in Arbroath.
“If you’re the sort of restaurant that’s expecting a professional service you’re going to have to go for the older, experienced staff regardless of the wage,” said Watson. “I’m not saying anything against younger staff, if they’re trained, but I think if it gets to the point where people are saving money by taking on younger staff and not getting the [level of] service, that’s a big mistake.”
Meanwhile Malcolm Duck, owner of Duck’s at Kilspindie and chairman of the Edinburgh Restaurateurs’ Association, argued that staff should be paid according to their ability to do the job, rather than by a set minimum wage.
“With employer’s tax it costs about £7.20 an hour to employ somebody on the minimum wage,” he said. “So you have somebody that comes in with no experience and, because they’re 26, you’ve got to train them, teach them and pay them full wage. We’re the only industry that has to pay wages when you’re teaching somebody. It just makes it very, very hard.”
Duck also said that an older worker is not necessarily more experienced than someone in their teens.
“Why should someone at 25, who is changing career, can’t get a job, wants to come and do something different, why should they get £6.19, and someone at 17, who has been working here for two or three years, gets less?,” he added.