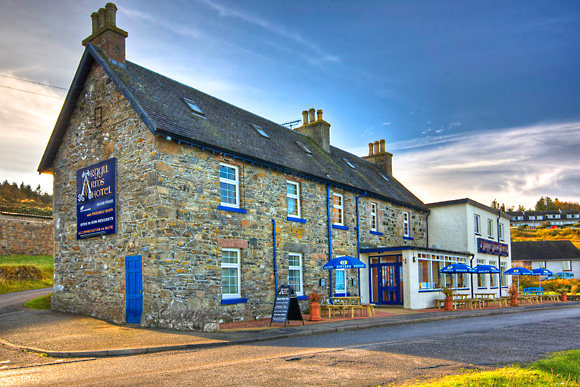 OPERATORS with a taste for the great outdoors might be interested in a hotel and tour business on the Isle of Mull, which has just come onto the books of Bruce & Co.

Located in the village of Bunessan, in the south of the Hebridean isle, the Argyll Arms Hotel occupies a former hunting lodge that’s said to have once belonged to the Duke of Argyll.
The hotel, which overlooks Bunessan Bay out to Staffa, has six en suite letting rooms and an 85-cover bar restaurant overlooking the harbour.
Included in the sale is a 17-seat mini-bus, which is currently used for the range of ‘wild explorer’ island tour packages offered by the hotel. The vehicle is also used to transport guests to and from the ferry port, enabling them to leave their cars in Oban.
The hotel is said to trade throughout the year on a good mix of accommodation, food and wet sales from locals and visitors to the island, whose attractions include castles and an abundance of wildlife, including 250 species of bird, basking sharks and dolphins. Tobermory is also the setting for the Tour of Mull road rally and the Mull Highland Games.
Bruce & Co said the business is “extremely busy” and has been put on the market due to “genuine changes” in the current owner’s circumstances.
“The Argyll Arms also plays an integral role in the local community as many locals use it for meetings and dinners, as well as being a popular base for tourists and outdoor enthusiasts,” the selling agent said in a statement.
“The sale of the Argyll Arms Hotel offers a rare opportunity to purchase a high quality, beautifully presented Hebridean hotel which is trading extremely successfully but with potential for expansion of the property and business.”
The Argyll Arms has a price tag of £549,000.