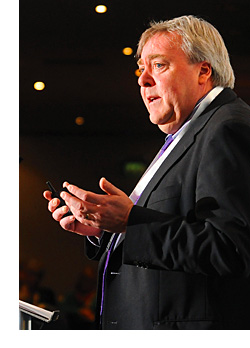 THE boss of tourism marketing body VisitScotland has urged operators to make the most of the major events coming to UK shores in the next two years.

Malcolm Roughead told the Scottish Tourism Week conference that bars, restaurants and hotels north of the border stand to benefit from this summer’s Diamond Jubilee and London Olympics, as well as the Commonwealth Games in Glasgow and the Ryder Cup at Gleneagles, which will both take place in 2014.
“There are opportunities there that we can grasp and build on,” he said.
“We know there will be a displacement effect in London during the Olympics. There’s a perception that London will be booked out solid and very difficult to get around in.
“We know, from our own and VisitBritain’s research, that people will be moving away from London during that time so there is an opportunity to get them up here.
“With events like the Ryder Cup and the Commonwealth, we can do nothing and these will still happen or we can really maximise them.”
Acknowledging that the economic climate remains challenging, Roughead insisted the outlook for Scottish tourism remains bright.
“We have this gift in Scotland for self-analysis and beating ourselves up but I think it’s important to step back and see what others think,” he said.
“In a visitor survey, 72% of people said they were very satisfied with their visit to Scotland and 84% said they will return to Scotland.
“There are huge opportunities that we must grab with both hands.”