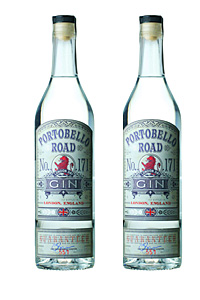 A LONDON bar has put its money where its mouth is and launched its own gin.

Portobello Road No. 171 is the brainchild of Ged Feltham and Jake F Burger, owner and manager of The Portobello Star in Notting Hill.
The pair had opened their own distillery above the cocktail bar in order to give customers the chance to distil their own gin. However, they were so pleased with their own recipe – devised in conjunction with distiller Charles Maxwell – that they decided to launch it as a stand-alone brand.
Portobello Road No. 171, named after the address of the bar and distillery, is a blend of nine botanicals, and is described as best served with tonic and a grapefruit twist.
It is stocked in Selfridges stores or can be bought directly from the bar itself.