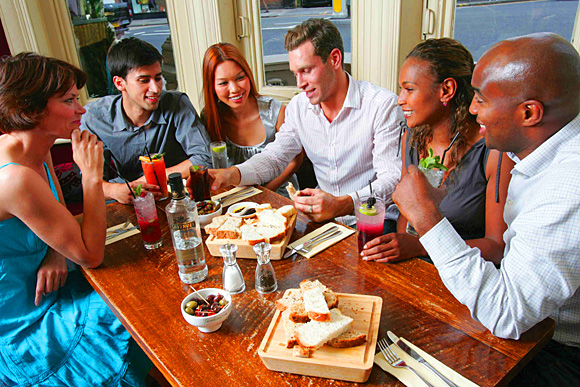 WHISPER it, just in case the weather gets any ideas, but spring is nearly here.

The clocks will move forward their customary hour on Sunday, and leading suppliers told SLTN last week it’s a good time for bars to breathe fresh life into premium spirits offers.
These include Maxxium UK, sales and distribution firm behind The Macallan, The Famous Grouse, Jim Beam and Courvoisier, where the seasons are a key driver of its annual activities.
“We look at what’s coming up seasonally all the time,” said Andy Gemmell, senior manager of the firm’s Mixxit training division.
“Seasonal offerings are a huge part of the Maxxium portfolio.
“We see from research that people’s drinking habits do change from season to season, so you have to keep on top of that. We’re actually planning for next winter [now], looking at what the trends will be and what promotions to do.
“Challenging people is important too – historically it’s been brown spirits in winter and clear spirits in summertime – but brands like Courvoisier can be used to make summer punch.
“So it’s about breaking people out of the habit of assuming certain things are for summer and others for winter.”
The importance of shaking things up for the new season is also recognised by Glasgow-based Whyte & Mackay.
The icy chill of winter might still be in the air, but Steven Rankin, who heads the firm’s on-trade sales team, said bars should be prepared for when the mercury starts to rise – and find ways to entice drinkers to try something new.
“Look at what is going on around you, in bar, socially and [at] what brands are doing, as that will have an impact on what drinks you should stock,” he said.
“Don’t get stuck in a rut or order what you always have – do your own spring clean and get rid of what’s not working and clear space for those that are or could work in your bar.
“It’s also vital to look at the stats to see which brands are performing well, as those are indicators to both what is popular among consumers and which brands are actively trying to increase rate of sale by introducing innovative POS and or promotions.”
And it seems there is evidence of growth in premium spirits right across the on-trade. Pernod Ricard, the spirits giant behind Absolut vodka, Havana Club and other top brands, said premium spirits were a “major contributor” as the total spirits category returned to value (+3.2%) and volume (0.2%) growth in the year to the end of October last year.
Customer marketing manager Dan Reuby said premium spirit sales rose 6.6% in value and 1% in volume terms over the period amid “strong evidence that customers are trading up”.
A similar point was made by Ian McLaren at Bacardi-Brown Forman.
“Consumers see premium brands as more of a treat at the end of a long week, making their night out more of an occasion,” he said. “Despite the economic downturn and people tightening their purse-strings, we have seen an increase in consumers who are willing to trade up to premium brands.”
Andrew Leat, senior category development manager at Diageo GB, told SLTN that “late night/circuit bars are driving the majority of the volume growth…with 42% of premium spirits coming from this sector”.
“Cafes and wine bars are a particular area of growth within the late night sector and these are natural territory for the premium spirit brands,” he said.
But Leat said the growth was not just confined to late night operators, stating that food-led and community outlets were are also driving sales by developing their ranges.
Maxxium’s Gemmell said operators that perfect the “one stop shop” – trading successfully in coffee, food and drinks across the day – are enjoying some of the best growth.
“Guys like Buzzworks, who are tied into food, are leading the way,” he said. “People are having cocktails before and after dinner but they’re not going at it [drinking] all night – they’re favouring quality over quantity.”
Within the premium spirits category, meanwhile, there is a suggestion that some categories are performing better than others. At Pernod Ricard, Reuby said the outlook for spirits like Cognac, whisky and rum is positive.
“The success of dark spirits comes as consumers are becoming increasingly adventurous in their drinks selection – they are looking to bartenders for advice and recommendations on what to choose in order to try something new,” he said. “Also, the mixability of dark spirits is something that consumers are becoming accustomed to, such as Mojitos which include golden rum, or simple serves like the Jameson Irish Mule which sees the whiskey mixed with ginger beer.”
Looking ahead, there is conviction among suppliers that the premium spirits scene will continue to see innovation, whether it be through serves like the ‘Ginger Grouse’ on tap from Maxxium UK or new varieties on the flavoured vodka theme.
But Pernod Ricard warned that launching brand new products can be a double-edged sword. “Introducing a new premium spirit in the current economic climate can have both pros and cons,” Reuby said. “Premium spirits are out-performing total spirits in the on-trade, however in tough economic times consumers may stick with established premium brands they know and trust.”