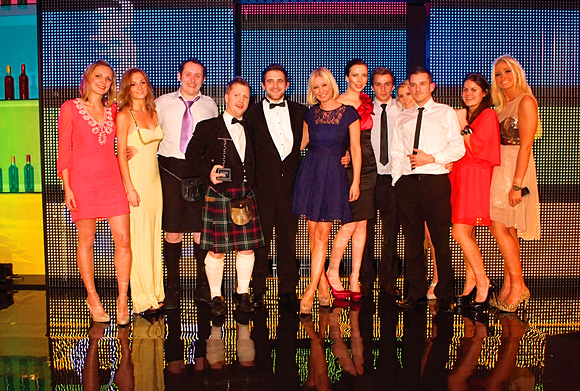 THE freedom to experiment was credited last week as a key factor in the success of Edinburgh cocktail bar 56 North.

The outlet, named the SLTN Spirits Bar of the Year for 2011, in association with Bacardi Brown-Forman Brands, has a firm focus on premium spirits, with around 300 bottles on the gantry, supported by a further 50 liqueurs.
The range regularly fluctuates as bottles are emptied and new brands and products introduced.
Talking to SLTN last week, co-owner James Sutherland said it’s important to offer drinkers a choice within each category, confirming that the bar strives to balance what he calls the “crowd pleasing, big brand name stuff” with lesser-known craft products sourced from a range of suppliers, from local companies such as Laurence Smith & Sons to larger, national names.
“The core list never really changes,” Sutherland explained.
“It’s more the non-core stuff, which is around 30% to 40% of the back bar, that we play with.
“If a bottle runs out we may not replace it, if it’s not selling or we’re not that bothered about it.
“We’ll jump around and say ‘let’s try this, let’s try that, what can we get in that price bracket?’ and go from there. It creates a lot of work, but it’s part of the fun of it.”
Sutherland used to work with Edinburgh bar group Montpeliers before striking out on his own in 2008, forming Sutherland Hospitality with brother Richard.
Accompanied by several former colleagues, the Sutherlands opened 56 North in the premises of the former Human Be-In in April of that year.
The initial concept of the bar was to offer a strong range of premium spirits with a focus on white spirits, particularly gin.
However, over the past four years the bar has expanded this core range to include a much broader selection of whiskies, rums and Cognacs, as well as a steadily evolving cocktail list.
The recruitment in 2010 of Martin Duffy, a former SLTN Barperson of the Year, boosted its cocktail credentials.
As the back-bar has grown the venue has developed a policy of letting customers pick what brands they’d like in their cocktails, and highlights products by flagging up a gin or whisky of the week.
And as well as leading and lesser-known international spirits, a conscious effort has been made to incorporate more Scottish products on the gantry.
“We’re trying to make an effort with the local stuff, which is something we were poor for at the start,” Sutherland said.
“If you’re going to stand out from the crowd now you need stuff that’s going to be a little bit more interesting. And I think people are quite savvy now as well.
“People know how much a bottle of something costs in Sainsbury’s and they’re saying to themselves ‘I can buy a bottle of this for £20 in the shop and they’re charging me £4 for a spirit mixer, what the hell?’ But if you’re playing with some funky stuff they can’t get elsewhere you’ll never hear them whinge.”
Whisky, in particular, has been a big growth area for the bar over the last year, and has been proving especially popular with foreign students at nearby Edinburgh University.
“The Scandinavians, the Russians – the same sort of markets where whisky is seeing expansion globally – they’re the types of people who are coming in and buying it,” Sutherland said.
“Whisky has never gone out of fashion, but I do think whisky as a category is back to being super cool, and we’ve made a real conscious effort to try and stock some more interesting stuff. We’re probably up to about 50 or 60 whiskies now.”
With an ever-expanding list of spirits, and an increasingly savvy customer base, staff training at the bar is crucial, and 56 North regularly holds training sessions and internal competitions for its staff.
Consumers are also getting in on the act as their own thirst for knowledge grows, with the venue also hosting tasting sessions and cocktail demonstrations for drinkers. Sutherland said expanding this side of the business will be a focus for 2012.
Ultimately, the bar will aim to host regular ‘spirit school’ events on set dates, further reinforcing its position as an expert in the world of spirits.
It is precisely this dedication to spirits that earned 56 North the title of Spirits Bar of the Year, according to Ian McLaren, head of product training and mixology at Bacardi Brown-Forman Brands.
“Edinburgh is renowned for having a range of excellent bars, however 56 North stood out due to its commitment to building a diverse and exciting spirits list,” he said.
“They are not afraid to experiment and frequently trial new and unusual serves. From tasting sessions to the constantly evolving product range, everything is geared towards introducing customers to something new, whilst ensuring that all tastes are catered for.”