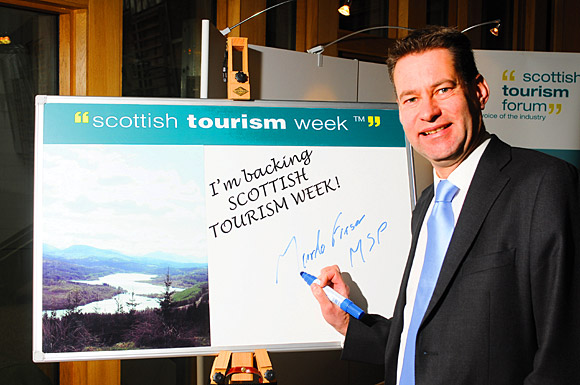 Speaking ahead of the event, which kicked off on Tuesday March 6 under the theme Competing for Growth, Leckie said the industry has “great potential” to contribute to Scotland’s recovery from the economic downturn.
Now in its seventh year, Scottish Tourism Week brings together a host of events designed to raise awareness of the industry and its role in the economy.
This year’s programme includes an industry dinner, a parliamentary reception and the annual conference, which was due to take place at Murrayfield stadium in Edinburgh as this section of SLTN went to press (see March 22 issue for coverage).
Scottish Tourism Week 2012 is backed by the Duke of Rothesay, as patron, and 66 MSPs, who signed an ‘I’m backing Scottish Tourism Week’ support board ahead of the event.
Leckie said the importance of tourism to the Scottish economy is “undeniable”.
“It brings in over £4 billion per annum and supports over 200,000 jobs across all parts of Scotland,” he said.