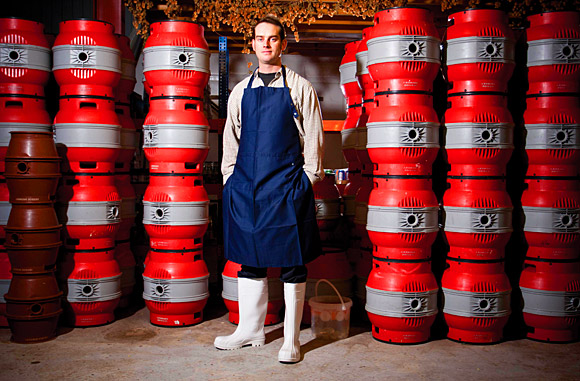 THE buoyancy of the craft brewing scene in Scotland has again been underlined with the resurrection and expansion of a north east brewery.

Deeside Brewery near Aboyne, which sells its flagship Macbeth ale and four other beers around Aberdeenshire, began trading in 2006 but was closed by founder Rob James last autumn as investment was needed for it to remain viable.
An anonymous local businessman stepped in at the start of the year and provided funds for new staff and equipment, and since then production has doubled to 6400 litres – the equivalent of more than 11,000 pints – a week.
James has also welcomed new faces into the businesses in the shape of brewery manager Tim Hieghton-Jackson and Kris Lovie, who runs Dusk bar in Aberdeen city centre.
The relaunch is said to have been welcomed by the hospitality industry, with new supply deals already secured with hotels, bars and restaurants in the Aberdeenshire area.
Talks are also understood to be taking place with a “national distributor” to allow the ales to reach a wider audience.
Stockists include the St Machar Bar, The Moorings Bar, The Mariner Hotel and The Grill in Aberdeen; the Stag, Burnett Arms, Douglas Arms and the Potarch Hotel in Deeside; and the Marine Inn and Ship Inn in Stonehaven.
The first commercial bottling run of 8000 bottles is underway at the brewery now.
“With a new look, but the same taste that has given the brewery its followers, Deeside Brewery aims to make its beer accessible to the customer but will still very much be a craft beer for those that enjoy our unique tasting notes,” manager Hieghton-Jackson said.
“We are excited about the interest we have received since increasing our production and especially about the plans for this year, including a beer festival with live music on July 14 at Potarch, Royal Deeside.
“The Deeside community has been very supportive of the brewery and we are proud to be producing the only craft beer in an area known for the exceptional quality of its food and drink products.
“There has been a massive trend among consumers in recent years to increasingly choose craft beers over mass-produced brands so we are confident we will be looking at further expansion in future.”
The Deeside Brewery’s return is the latest in a series of investments made by Scottish microbrewers over the past year.
Brewdog outlined plans to build a new brewery in Aberdeenshire last year; Edinburgh’s Stewart Brewing is investing in bigger premises and the Scottish Borders Brewery, which celebrated its first birthday last month, also plans to up production.
The developments came as the most recent Cask Ale Report, published in September, said the category was appealing to a “new audience of younger, affluent and sociable drinkers”.
According to the report, cask is outperforming the total UK beer market, with a 15% market share. While the total on-trade beer market saw a 7.8% fall, the report found cask volumes dropped by 2% amid “signs that the category is moving back into growth this year”.