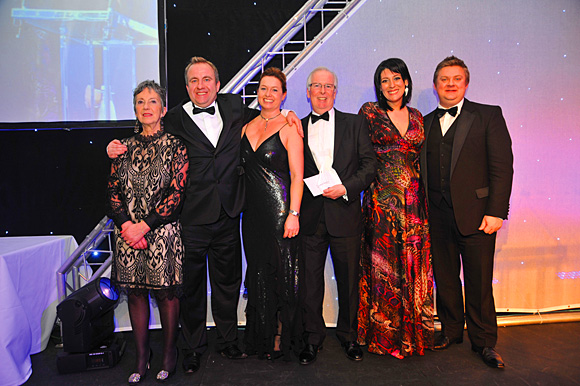 JW Filshill has won the top award at the Scottish Wholesale Achievers Awards for an unprecedented sixth time.

The Glasgow-based company was named Champion of Champions at the annual awards dinner, held at the Corn Exchange in Edinburgh earlier this month.
It is the sixth time the outfit has scooped the top prize at the awards, a feat described as an “incredible achievement” by Filshill managing director Simon Hannah.
“We are constantly striving to push boundaries within the industry and develop our business while always ensuring that we offer the highest possible levels of customer service,” said Hannah.
Judges praised the company for its continued investment in technology, which they said has helped to improve efficiency as well as business development.
In addition to the Champion of Champions award, Filshill was named Best Retail Wholesaler and also took the inaugural Corporate Responsibility Award – a category co-judged by SLTN editor Scott Wright.
Other winners on the evening included Wick-based Sutherland Brothers, which was named Best Licensed Wholesaler, On-Trade, and CJ Lang & Son, which was dubbed Best Licensed Wholesaler, Off-Trade.
United Wholesale (Scotland) was named Best Cash and Carry Depot and also took the Best Retailer Development Programme trophy.
3663 was named Best Foodservice Wholesaler while Forteith Foodservice scooped the award for Best Marketing Initiative.
On the supplier side, AG Barr took the award for Best Overall Service, Irn-Bru’s Phenomenal Summer campaign ad was named Best Advertising Campaign, and Coca-Cola Enterprises took the Project Scotland award.
Kate Salmon, executive director of the Scottish Wholesale Association, the organisation behind the awards, said that all winners had displayed “exceptionally high levels of customer service”.
“By taking risks and embracing the partnership ethos that Achievers promotes they have set themselves an even higher benchmark to aspire to in the coming year,” she said.
“But that’s what Achievers is all about. It encourages best practice within Scottish wholesaling and challenges wholesalers – big and small – to think differently and engage more effectively with suppliers.
“In my book, that makes every wholesaler who enters the competition a winner.”
The Scottish Wholesale Achievers Awards took place at the Edinburgh Corn Exchange earlier this month and was attended by 500 professionals from the wholesale industry. BBC Scotland presenter Catriona Shearer hosted the event.