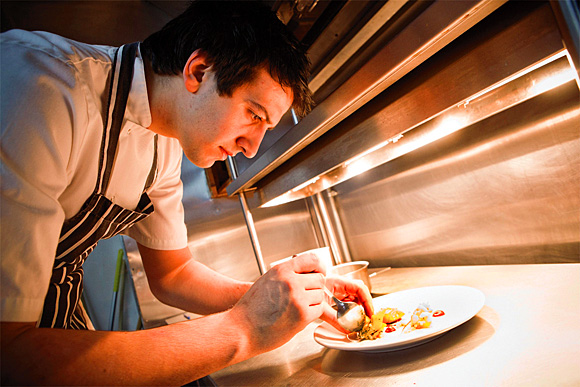 IT’S a new restaurant, and the first of its kind in its immediate vicinity. But despite launching at the height of the voucher era, and the challenges involved in starting up a business in the current climate, discounts are the last thing on Nico Simeone’s mind.

The chef proprietor of La Famiglia on Glasgow’s Cleveden Road, a former Young Seafood Chef of the Year, is imbued with the confidence youth often brings as he embarks on his first business at the age of just 23.
Thanks to the strong grounding he received early in his culinary career – working for Brian Maule in Glasgow and Craig Sandle, former head chef at No.1 at the Balmoral Hotel in Edinburgh – he has enough faith in his own talent and the quality of his product without resorting to Groupon to drive people to his Kelvindale door.
“Deals are creating their own market and I’m not interested in that,” Nico told SLTN.
“I’d go on a website for advertising purposes, but not to lower the standard or price in a way that would cheapen the brand.
“If you go on Groupon you could get 1000 people coming through the door, but you’d be lucky if you get a dozen back. These people are only looking to jump on the next deal. I want to build loyalty.”
Not that Simeone is averse to adopting online marketing to boost the restaurant’s profile.
He has enlisted a website designer who has created a Facebook page for La Famiglia, which opened its doors in August last year.
The intention is to use the page to target discerning diners by promoting events at the restaurant, including a forthcoming dinner with London-based Eurowines in March.
The assured approach Nico is taking to running his own business stems from the education he received early in his career and from the steadying influence of his family, in particular his father and uncle, who have run various businesses.
After falling into cooking as a way to escape school, he learned the basics of his craft at Sarti’s, the Glasgow-based Italian restaurant group, before a stint with Brian Maule at Chardon d’Or followed. However, it was under Sandle at The Balmoral where he feels he progressed most.
“Craig taught me 90% of what I know, from cooking to prepping; it all comes down to him,” Nico explained.
“It was very difficult to tell him I was leaving.”
These days Nico continues to reply on his father and uncle for guidance (“I definitely wouldn’t be where I was without their advice,” he explained), as well as friend Marco Acari, the owner of the three La Vita Spuntini Italian restaurants in the Glasgow area.
Yet while Nico has senior figures to turn to for advice, his culinary direction is his own making.
Given his familial roots, he was never going to pursue anything other than an Italian-influenced style of cooking.
But he’s on a mission to convince consumers that there’s more to Italian food than mass market pizza and pasta joints, popular though they are.
He said the menu at La Famiglia “offers a modern and contemporary twist, right down to the way the dishes are plated and served to customers”.

I want to bring people out their comfort zone – Italian food is not just about pizza and pasta.

A twin-track strategy is employed, with a market (lunch) menu offered through the day, and an a la carte menu at evenings and weekends. Prices on the market menu range from £6.95 for one course to £10.95 for three, and from £8.95 for one course to £12.95 for three in the evening.
Nico’s ‘signature’ dishes include a braised chicken wings and Parmesan gnocchi starter (£6.95) and, on mains, filleted hake wrapped in Parma ham served on an Italian ratatouille with olives, pine nuts and caper berries (£14.95). He “constantly” tweaks the dishes on the a la carte menu (the market menu changes on a quarterly basis) and is relishing the creative freedom that running his own kitchen is bringing.
“My family has always run their own businesses, so with my parents taking care of the accountancy side of things, I can focus all my attention on getting the culinary aspects of the restaurant absolutely correct,” he said.
“I want to try and bring people out their comfort zone – it [Italian food] is not just about pizza, pasta and cream.”

Nico’s wine list is based entirely on Italian products and he buys from three London-based suppliers: Eurowines, Vinum and Passione Vino.
La Famiglia was designed by Michael McLaughlin and aims to offer an intimate, relaxed space to enjoy quality food and wine. It seats 44 covers and employs eight staff.
Based at 11 Cleveden Road, Kelvindale, Glasgow, it opens from noon until 10pm, Tuesday to Sunday. 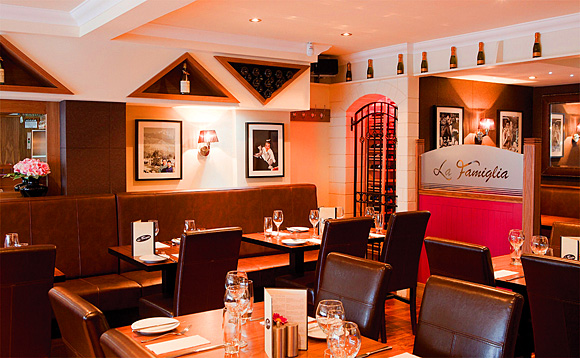