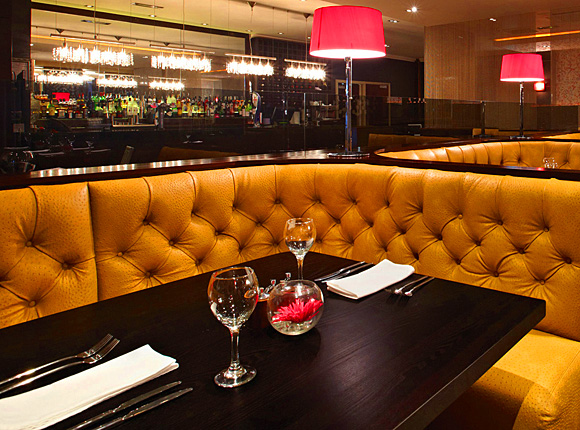 STRATEGICALLY, the acquisition of Dalziel Park was a natural fit for Lisini Pub Co.
The family-run business built its reputation on running popular community venues around Glasgow and Lanarkshire, before making a successful transition into the weddings and events market.
Dalziel Park, with its leafy rural location on the outskirts of Motherwell, offers the chance to do both – and a little more. It also came with its own golf course, a big attraction for a family with a strong sporting pedigree, albeit in the playing sense.
Lisini founder Harry Hood starred for Celtic in the late 1960s and ‘70s, his siblings excelled in football, boxing and ice-skating, and daughter Lisa Wishart, now Lisini’s managing director, represented Scotland at hockey.
Yet while there were numerous attractions to the acquisition, the family knew it wouldn’t all be plain sailing.
Dalziel Park had fallen into administration under the previous regime, and any new owners would have a job on their hands to save bookings from couples whose wedding plans had been thrown into doubt.
But important though it was to salvage that business, it turned out to be the tip of the iceberg. If the Hood family had any doubts the acquisition would stretch them to the full, those were quickly dispelled when they took the keys to the premises in June 2011.
“The building had been added on to four or five times by different contractors, so nothing was connected,” Wishart told SLTN.
“The electrics weren’t safe and we inherited a power shortage. We had power issues and dreadful draining and plumbing issues, so a lot of money has been spent on things you don’t see – roofs and what not.
“And we didn’t have proper kitchens – we had to extend and build brand new kitchens. We also had to extend to build new cellar spaces.”
The problems didn’t end at the front door either.
By the time the acquisition went through the golf course was unrecognisable as such, triggering even more unscheduled investment in the business. That was before the complex challenge of running a golf business could even be contemplated – something Wishart admits is outside her comfort zone.
“We are a sporty family – my father was a professional footballer and there’s a huge history of professional sport in the family, but none of us know how to run a golf course,” she said. “It’s been a steep learning curve but we’ve now got a golf course. There’s been a huge amount of investment to sort out the drainage and to get the fairways looking like fairways and the greens looking like greens.”
From the moment Lisini took control of the business last summer, it launched into full refurbishment mode – a process that went far beyond changes to the fabric and interior makeup of the building.
“It wasn’t just a refurb,” explained Wishart, who appointed Glasgow-based AFH Strategic Contracts as the main building contractor, “it was creating a business from scratch.”
In addition to the essential investment in services (described by interior designer Dominic Paul of IBDP as the “overwhelming” challenges of the project), significant changes were made to the flow of the venue, with the reception area opened up and a series of doors that cluttered the way to the function rooms removed.
“As soon as you walk in the reception you can see the bar, whereas before you had no chance,” Paul explained.
“We took all that away and put in a glass screen and door, which now invites you in.
“The function room has [also] been given a total makeover – we augmented access to the main function room, creating an entirely new kind of holding area and bar. We introduced a glass wall and glass screens so you can actually see into the bigger space.
“Before it was almost as if people were corralled – they walked into a lobby then another lobby and then into a bar. The space just didn’t work.”
The function space is also more flexible now thanks to the installation of a “move wall” in the larger area, allowing it to be split in two if events demand.
With the necessary physical changes made to the building, the icing on the cake came with the decor. Working to a “contemporary boutique” brief, new colours and wallpaper have been introduced throughout and new furniture acquired, though some of the original pieces have been retained and given a new lease of life.
In the Wide Mouth Frog, the venue’s standalone restaurant (another first for Lisini), the mood is intimate and slightly clubby thanks to wooden floors, tables and wall panels and the interchanging use of brown and green leather seating.
A similar feel pervades the main bar area. By contrast, the mood is brighter and airier in the function rooms, where a new carpet, wall lights, wallpaper, light fittings and a new colour palette have been introduced, with light also provided by the glass wall opening out to the reception area.
Wishart concedes it wasn’t an easy project for the designer to undertake, but is now content that the hard work – and the stress the project brought to all concerned – is now proving to have been more than worthwhile.
“It was a hard one for him – halfway through the refurbishment project I felt the feel wasn’t right,” she said.
“I wanted to have a warm, luxurious, almost gentleman’s club feel [in the bar and restaurant]. It was all very bright initially so we just stripped the wallpaper back and started again.
“But we’re really pleased with how it’s turned out and the response has been incredible.” 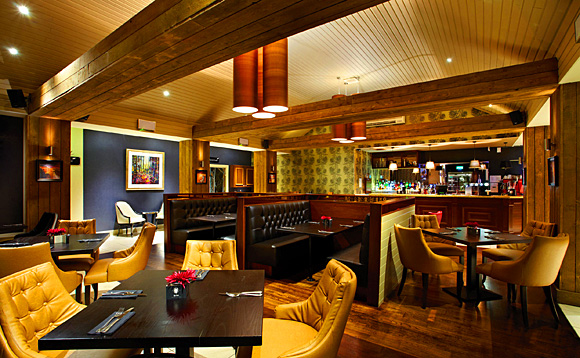