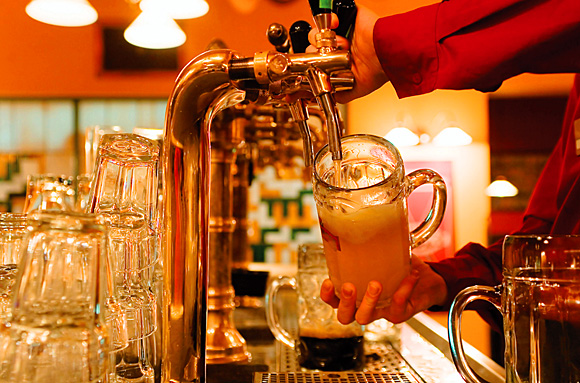 IT might be among the least glamorous aspects of running a pub, but it remains one of the most important.

Beer dispense experts told SLTN last week that effective cellar management – from controlling the temperature of the beer storage area to rotating kegs and cleaning lines – can help operators maximise profits and ensure they give the right impression to drinkers.
And, they explained, technology is playing an increasingly prominent role in cellar management proceedings.
Describing the cellar as the “engine room” of any pub operation Steve Alton, commercial director of dispense system supplier iDraught, argued that technology is now a critical component behind any successful operation.
He said that installing the right technology in the cellar can make a fundamental difference to the quality of the product served to customers.
“It makes sound economic sense to invest in a system which ensures that your draught product is the best quality it can be, while ensuring your bar and cellar operations run smoothly, minimising hiccups and ultimately saving money,” said Alton.
Aside from the importance of saving money, another reason to look after the cellar is the customer.
According to Gary Creed, leisure business manager of dispense system specialist Cryoservice, pub customers are becoming more discerning and are increasingly able to tell a good pint from a poor quality one.
Subsequently good cellar management can be “a differentiator and a customer loyalty generator”.
“There’s a clear link between successful outlets and the standards they maintain,” said Creed.
He added that stock rotation, line cleaning, glassware and gas safety are among the most important factors in cellar management.
Scottish & Newcastle Pub Company advises its lessees that cellar management can be broken down into four components collectively referred to as TOCK: temperature, organisation, cleanliness and knowledge.
Temperature, in particular, is a key consideration in controlling both costs and product quality, according to S&NPC.
The company’s guidelines assert that beer should be kept at 12ºC in order to provide consistent pints, as different temperatures will affect the amount of gas present in the beer.
The cost of maintaining this temperature will vary, however, depending on how well the cellar is insulated.
In a well-insulated cellar the condenser should have to work no more than 12 hours a day, whereas gaps in the insulation can lead to the equipment running for much longer – leading to a significant increase in running costs.
It is also vital that the cellar space is kept clean and well organised, explained S&NPC, which advises against using the cellar as a food storage area as it can lead to staff regarding it as a dumping ground.
Central to the TOCK approach of cellar management is ensuring that staff are well trained and understand how the cellar functions.
“If everyone who goes into the cellar understands what everything does and why, then everyone will do what is meant to be done the correct way and not take short cuts,” said Edward Theakston, who is responsible for the firm’s cellar management training.
“This will then ensure the organisation points are achieved.”
Cleaning the beer lines regularly is also of paramount importance.
Steve Larkin, business support manager of Innserve, a specialist supplier of dispense systems to the licensed trade, said that lines should be cleaned every seven days.
It may sound straight
forward, but it’s a rule that is said to be ignored by many pubs across the UK.
“With the ever-increasing cost of beer, licensees are looking at the cost of the wastage during line cleaning and reducing the frequency of cleaning,” said Larkin.
“This is a false economy, as it reduces the quality of the drinks sold and therefore the customer experience and consequently their satisfaction.”
It is difficult to overstate just how important regular line cleaning is to a pub’s overheads.
According to Larkin, irregular line cleaning, coupled with poor cellar temperature, can lead to wastage that could cost the average pub around £14,000 in lost sales.
And Larkin revealed that the issue of poor cellar standards is not confined to a small number of pubs.
Although he said the overall standard of cellar management in Britain’s pubs remains “generally pretty good”, recent years have seen a general lowering of standards across the whole of the UK.
Another specialist in the field, CellarBright managing director Hance McGhie said the sidelining of proper cellar management has not been caused by publicans cutting corners in the economic downturn.
“Cellar management is mostly an afterthought and the last thing on the agenda, where in reality it is the key part of the business” said McGhie.
“If this fails, the business fails. Everyone seems to look at short cuts and the quality of trained staff is poor.
“I think the lack of standards in a lot of places has been there since well before the downturn.
“It is a room that is out of the way where [nobody] really goes so standards do slip.”
McGhie also stressed the importance of cleaning beer and cider lines every seven days, saying that “it is a myth” that lines can go 10-14 days without being cleaned. “Don’t cut corners to save pennies, if you do this you will lose hundreds of pounds,” he said.