Price reduced as family seeks to focus on other business interests 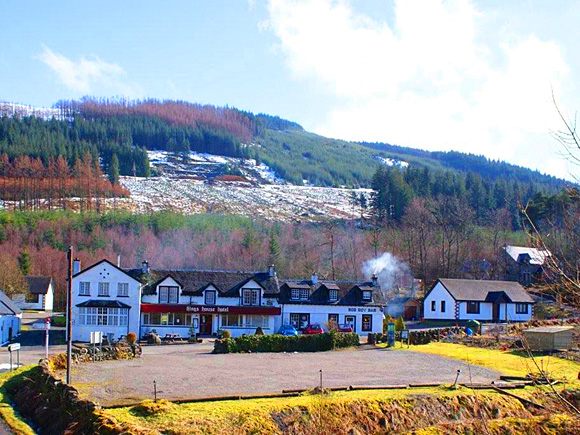 A HOTEL in the heart of ‘Rob Roy’ country is being marketed with a reduced asking price as the current owners seek to pursue other business interests.The Kingshouse Hotel in Balquhidder is for sale at £350,000 for the freehold, down from the original asking price of £395,000.
Built on the site of a royal hunting lodge of the Stewart Kings that’s said to have been used by King James VI of Scotland, the hotel is within Loch Lomond and The Trossachs National Park and is two miles from the graves of Rob Roy McGregor and his family.
With seven en suite letting rooms, two bars (the King James and the Rob Roy), a restaurant and sun lounge, the property also comes with a detached two-bedroom cottage just yards from the hotel, which could be used as owner’s accommodation.
The business has been owned by the same family for more than 20 years, who are said to have built up a strong reputation for the hotel.
Christie & Co’s Graeme Smith, who is handling the sale, said a combination of the current market conditions and a need to focus on the other family businesses, prompted the price reduction.
“The hotel is in an outstanding location with open views of the surrounding countryside, including the glens and braes of Balquhidder directly opposite,” he said.
“Having spoken with the client, Graeme Courtney, it was decided to reduce the price to £350,000 as the family is keen to concentrate on its other business interests and Graeme’s parents want to retire.”
Graeme Courtney said the hotel has been owned by his parents since 1990.
“It was a hard decision to place the hotel on the market, but it was the right thing to do as it will allow more time to focus on other family businesses,” he said.