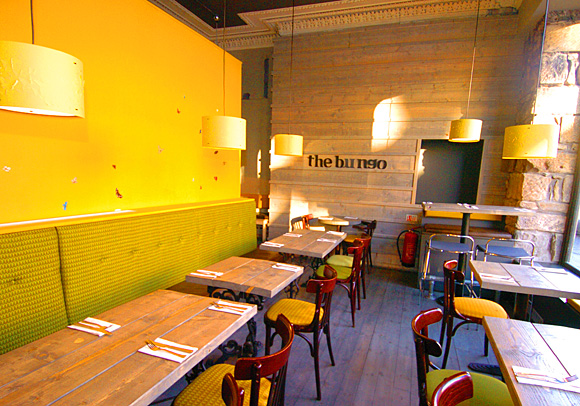 RECLAIM, rework, recycle – that was the mantra adopted by Glasgow bar and restaurant owners Catherine Hardy and Jacqueline Fennessy during the refurbishment of their latest outlet.

The pair salvaged what they could from the former Fotheringay pub on Nithsdale Road and incorporated it into the design of The Bungo bar and kitchen, which they opened last month.
Not that their strategy meant the revamp was any less thorough – or costly.
The duo, who launched the Left Bank in Glasgow’s Gibson Street in 2006 and followed that with the Two Figs on Byres Road three years later, spent a cool £250,000 and eight weeks transforming the south side pub, which had been closed for over two years.
Much of the budget went on essential rewiring and plumbing work, and on improvements to the frontage of the B-listed property, including the installation of large picture windows and sandstone restoration. Internal structural changes included the creation of a kitchen in the former pool room; the relocation of toilets, which Jacqueline admits was a “bit of a jigsaw puzzle” in order to retain part of an original stone wall; and adding a ‘window’ to one of the internal walls to link the bar and restaurant.
A dislike of seeing anything go to waste, coupled with a desire to give the new venue a ‘lived in’ look, led Catherine and Jacqueline to reuse many of the existing fixtures and fittings. The fall-out from recession also had some bearing on the total spend.
“We walked into it knowing that bank funding was probably not an option in the current climate,” Jacqueline told SLTN last week.
“It was self-funded with contributions from Tennent’s and the landlord.”
“We had a very tight budget,” added Catherine. “When you look at the cost per square foot, we spread the money as thinly as we could while trying to achieve a high-impact transformation.”
Working with designer Paula Murray of Supertonic, the operators came up with a fresh new look for the premises that incorporated elements from its previous incarnation.
Original fixed seating frames were retained, repositioned and reupholstered in bright green and yellow material designed by Timorous Beasties and produced by Bute Fabrics. The chairs, as well as cube stools created with wood from an old mantelpiece, have been upholstered in the same fabric; while the original wrought iron table bases have been given a new lease of life with stainless steel and reclaimed wood.
The bar counter was retained and clad in a combination of Douglas fir wood and glass, and topped with stainless steel. And amber glass light fittings from the outlet’s Fotheringay days have been teamed with new flex and hung in the main bar area.
Having exposed much of the original stone and brickwork internally – a feature of The Bungo’s two sister venues – many of the remaining walls have been painted bright yellow and adorned with a butterfly design, handpainted by Scottish artist Nichol Wheatley.
Wheatley also created a large street map of Strathbungo, or ‘the Bungo’ as the area is referred to locally, which dominates one wall in the bar. Catherine and Jacqueline hope the feature will help position The Bungo at the heart of the community.
Their restoration of the premises, which involved working closely with organisations like Historic Scotland, also seems to have gone down well in the conservation area, with trade “exceeding expectations” since the venue opened on December 12.
“We want to be first and foremost a community bar that people can visit several times a week,” Catherine said.
“Everyone had told us that the Fotheringay was a great pub in its day
so we wanted to keep bits of it and incorporate them into The Bungo.”
It’s not just in the front-of-house areas that items have been recycled, though.
Much of the bar and kitchen equipment was bought second-hand – a move Jacqueline said has allowed them to obtain higher spec kit.
“We learned lessons from the Left Bank and the Two Figs,” she said.
“After the first year at Left Bank we had to replace a six-burner [stove] and chargrill because of the volume of food we were doing. Here we’ve spent the same amount of money but we’ve got better quality equipment.”
And work at The Bungo is not quite finished yet – the pair plan to revamp the 100-capacity basement function room in the coming weeks.
After that, they intend to “consolidate” and “expand what we do rather than where we are”.
“We have confidence in the concept and the site,” added Catherine.
“We spent the same on the [refurbishment of] Two Figs and it’s a third of the size. This [The Bungo] is less of an investment for potentially more of a return. This is probably the one I’ve felt most confident about.” 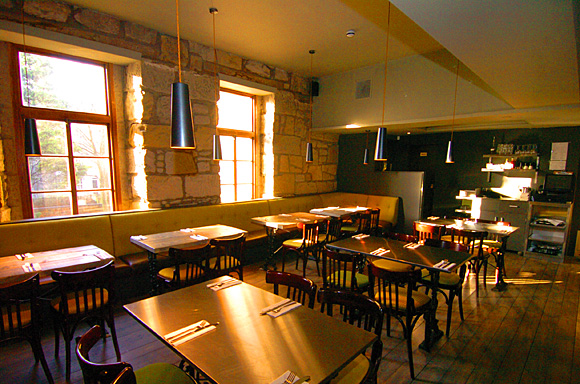 Many fixtures and fittings from the former pub were retained and reconditioned for use in The Bungo.