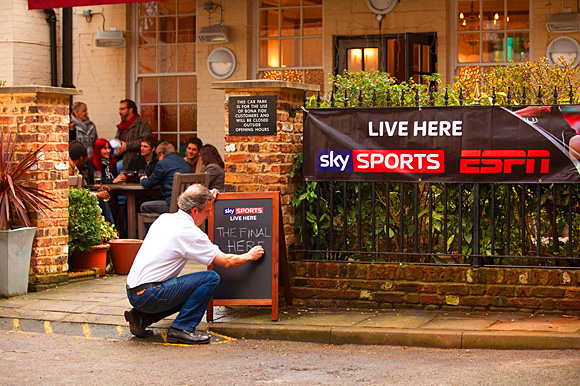 The firm, which holds live TV rights to SPL, EPL and Champions League football, said the changes are part of a concerted effort to make its offer accessible to more businesses.
But it’s been criticisesd by the SLTA for not cutting prices for smaller, non-food pubs.
The new structure offers discounts of up to 30% for food-focused outlets and the same amount depending on the population density of the location venues are based in.
Pubs must demonstrate the proportion of their turnover derived from food to qualify for the discount, with the maximum savings available to businesses generating 60% or more of earnings from meals.
In addition, the firm said it will no longer lock subscribers into 12-month contracts and instead give customers the chance to sign up on a monthly rolling contract.
While the changes will not lead to savings across the board, some operators confirmed they would be receiving discounts.
Maclay Inns, which has 26 managed outlets around central Scotland, said around a quarter of its Sky-subscribing estate stood to benefit from the extended food discount.
“They’ve upped the discounts for food turnover, which are now a bit more attractive,” commercial manager Neil Paisley told SLTN.
“The problem is we’ve never been able to prove that we do that level of food turnover.
“You need to prove it through your rates assessment; the paperwork in England is slightly different and we find it very hard to prove it to them.
“We are working on this, though, and the bottom line is that if we can get that working we will benefit in about 25% of the units that have Sky.”
A spokeswoman for Sky Business told SLTN operators can obtain proof of their food turnover by requesting a valuation sheet from their local rates assessor; customers will be given a 30-day grace period to obtain it, she added.
Dennis Forsyth described his 20% location-based discount, calculated by Sky using ordnance survey data, as a “step in the right direction”.
But the SLTA was less impressed. “This is either a gesture of goodwill or desperation because they’re losing so many subscribers,” said chief executive Paul Waterson. “A lot of our members believe the pubs that need the most help are non-food outlets.”
Iain Holden, managing director of Sky Business, said Sky was determined to make its prices fairer and better reflect the needs of individual outlets; he also confirmed that further discounts would be announced in future.
“We fundamentally believe that Sky should be available to every outlet,” he told SLTN.
“To be able to do that, though, you have to price proportionately to the value [the outlet gets from the product]. To date, it’s all been about how to make Sky work for bars. What it should be about is how Sky fits into the proposition of the bar.”