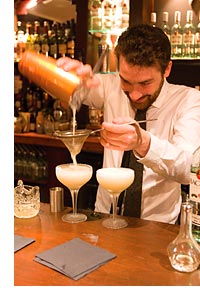 AN Edinburgh bartender has beaten competition from across Scotland to reach the final of the UK-wide Bacardi Legacy cocktail competition.
Gordon Purnell of The Voodoo Rooms won the regional heat with his Silver Ghost cocktail, which combines Bacardi with lime and apple juices, velvet falernum liqueur, rock candy syrup, egg white and cardamom. Judges described the drink as “innovative yet accessible”.
Purnell will now compete against seven bartenders from across the UK at the final in London on February 9, with the top three receiving a budget and six months to market their Bacardi cocktail in a three-way race to become the UK’s entry to the global final in February 2013.
The winning UK cocktail will then compete against Bacardi-based concoctions from around the world for the chance to become part of the legacy of Bacardi original cocktails.
Liam Newton, marketing director at Bacardi, said the competition, which is now in its fourth year, aims to showcase the “creativity and innovation” of the UK’s bar scene.
“Becoming part of the Bacardi legacy is an amazing opportunity and the Bacardi Legacy cocktail competition is a great chance for bartenders to showcase their creativity in coming up with a modern day classic cocktail,” he said.