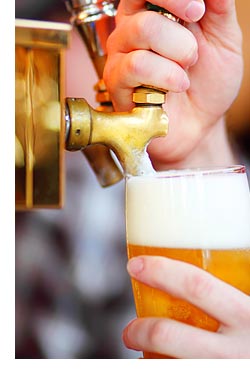 LICENSEES are braced to add up to 10p to the cost of a pint after brewers unveiled their annual new year price rises.

Molson Coors, Heineken UK and Carlsberg have all confirmed increases that will add an average of 7p a pint to the wholesale price of beer.
Tennent Caledonian Breweries and Belhaven said they were reviewing their prices and were unable to provide any figures at this stage.
Carling owner Molson Coors was among the first to go, confirming that the cost of a barrel (36 gallons) of the lager went up by £19.99 – or 7p a pint – from January 2.
Finance director David Heede said a “sharp increase” in the cost of energy and raw materials, including a 46% rise in the price of natural gas and a 31% uplift in the cost of barley last year, left the brewer with no room to manoeuvre.
Carlsberg UK also cited rising raw material, energy and fuel costs for what it described as a “necessary price increase” that added an average of 7p a pint to the wholesale price of its brands from January 9.
Heineken will raise its wholesale draught and packaged beer prices from February 6, with Foster’s lager set to go up by £19.79 a barrel, or 7p a pint.
“While we appreciate that price rises are never popular, we are unable to ignore inflationary pressures like the rising cost of raw materials, energy and fuel that currently impact on beer production,” a spokesman said.
Belhaven brewery MD Euan Venters said the firm is currently looking at its pricing structure and could not comment at this stage, while TCB sales chief John Gilligan said that while the Tennent’s owner would “almost certainly” implement a price increase, it would be “considerably less than inflation and not too painful”.
The rises come as some pubs aim to drive footfall by holding January sales (see page 2). Operators contacted by SLTN said the beer price rises could force them to add 10p to the price of a pint to maintain margins.