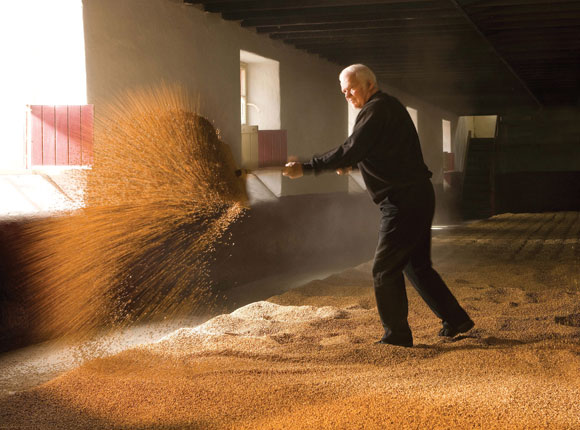 DISTILLER William Grant & Sons its looking to grow The Balvenie in the Scottish on-trade in the new year after expanding successfully in London.

SLTN spoke to UK brand ambassador Dr Andrew Forrester after visiting the malt’s Speyside distillery last month.
And he told SLTN that premium bars and hotels in the UK capital are engaged in a “turf war” over the crown of best whisky bar which has created a real opportunity.
“London is hugely important to showcase your brands,” Forrester explained.
“There’s lots of places you want to be seen and there’s lots of places where there are these really influential bartenders, and if you can get them behind your brand and interested in your whiskies then they can do a huge amount to spread the message by word of mouth to the consumer.”
Forrester has been targeting a number of the south’s leading hospitality businesses throughout the year, hosting tastings and distillery visits in a bid to increase The Balvenie’s listings in these top-end outlets.
“One of the key things we’ve learned is [the top bars] want something absolutely unique and special,” he said.
“You can’t just go in with the same thing that you’re going to put absolutely everywhere else.
“I guess their ultimate goal is to have a whisky that only they’ve got – so rare, exclusive expressions [interest them].
“But also the ritual of serving whisky itself [is important], and having interesting ways of presenting whisky to people, rather than just pouring it in the glass.

Tun 1401 satisfies David’s desire to make whisky how he wants to.

“The other thing is just giving them some tools to enable them to talk about the whisky and give a little bit of education.”
The strategy has led the whisky bar in London’s five-star Athenaeum hotel to keep a cask of The Balvenie in residence, as well as samples of new spirit and three matured liquids that are combined to form The Balvenie Signature.
Wm Grant, through its distributor First Drinks, has also been promoting The Balvenie Forty and The Balvenie Tun 1401 expressions to the trade.
Launched last month, Forty is the rarest expression of The Balvenie, with only 18 bottles for sale in the UK, while Tun 1401, the second batch of which was launched earlier in the year, is a mixture of whisky taken from ten different Balvenie casks, from the 1960s, ‘70s and ‘80s.
Batch 3 was shipped to the US market shortly after the release of Batch 2 and a fourth batch, destined for the travel retail market, is currently maturing at The Balvenie distillery.
Forrester said the Tun 1401 is a tempting prospect for the on-trade as it allows bars to offer whisky fans the chance to try “extraordinarily rare whiskies from these extraordinarily rare casks” at a comparatively cheap price (bottles of Tun 1401 are priced at £150 each, compared to Balvenie 40 at £2500).

What we’ve learnt is that the top bars want something absolutely unique.

Forrester said the expression could only have been created thanks to the free hand given to master distiller David Stewart. “David’s in his 50th year at The Balvenie distillery and he’s been given the freedom to do whatever he wants,” he said.
“Although they all carry the same name – Tun 1401 – each and every cask and batch is actually quite different.
“I guess it satisfies David’s desire to just really enjoy making whisky exactly how he wants to without the confines of ‘it needs to deliver X amounts of bottles, volume or profit’.
“That’s the freedom that comes with working for an independent family business.”