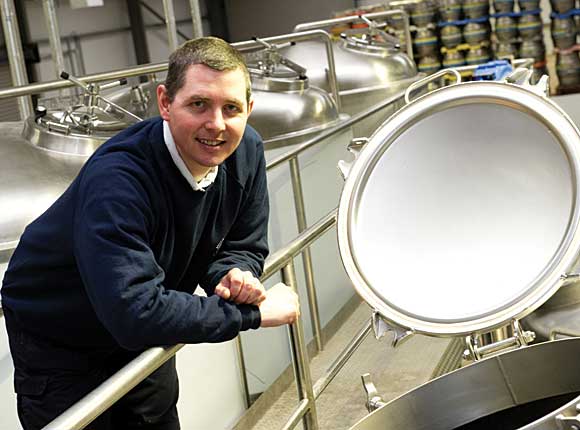 CASK ale pubs will this month be festooned with all kinds of seasonal offers from the country’s burgeoning microbrewing scene.

And the good news for suppliers is that they won’t eat into sales of their core products.
That’s according to several brewers contacted by SLTN, which insisted last week that festive sales supplement – not damage – sales of their regular brands.
Perth’s Inveralmond Brewery, whose Santa’s Swallie will be listed in around 80 Tesco stores (alongside its core Ossian and Lia Fail ales), said the arrival of a seasonal beer has no effect on the brewer’s other products.
“People are expecting us to brew it now and customers are asking us when Santa’s Swallie is coming out so they can get themselves geared up for it,” said owner Fergus Clark, “so it doesn’t really have any great effect – there’s no cannibalisation of our sales just because we have a seasonal on.
“It’s an additional product so it does help with our sales overall.”
Tom Cannon, sales and marketing boss at the Caledonian Brewing Company, agreed, and insisted the appearance this month of the 3.7% ABV Santa’s Little Helper in UK bars should boost the overall sales picture.
“It’s definitely what people are looking for because in cask ale you can do that and be current,” Cannon said.
“That’s why we do a calendar to revolve [our ales]. If you look at next year’s calendar, for example, we’ll be doing an American ale in November for the US elections – that’s what’s happening in November and it’s what people will be talking about.”
Cannon also highlighted the potential of seasonal offers in drawing new drinkers to the cask category.
“That’s always the plan, but some beers are more likely to do that than others,” he said.
“If it’s a particular month when you have a high ABV, dark, specialist beer, they [drinkers] are less likely to switch to it from lager.
“But something that has a lower ABV and is a bit easier to get into could do exactly that.”
One challenge brewers face at this time of year is ensuring they brew just the right amount of their seasonal ale.
At Inveralmond,
Clark said forecasting can be an inexact science.
“You’ve got some historical data you can look back on, but bringing on a new customer like Tesco is a bit of a finger in the air job,” he told SLTN.
“You have to use common sense, try and work through a few figures and see if it looks sensible. Clearly you don’t want too much left after Christmas.
“Hopefully we will hit just the right amount.”