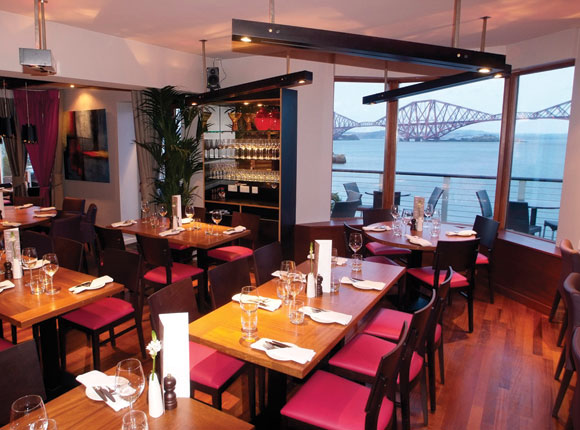 THE restaurant at award-winning South Queensferry venue Orocco Pier has been relaunched following a root and branch refurbishment.

Owner Renaissance Ecosse has spent £130,000 remodelling and extending the existing restaurant space to create the 136-cover Samphire Seafood Bar & Grill, which takes its name from the sea vegetable.
Launched two years after cafe bar Antico was added to the 12-bedroom hotel, Samphire features a granite bar with seating, allowing the space to be used for dining and drinking.
Elsewhere, the furniture and fabrics used, including reclaimed solid iroko wood, Bute fabric with fuschia lining and dark wood chairs with fuschia leather seat pads, are designed to create what managing director Peter Wilson described as a “relaxed and informal place to come and drink and eat”.
“The restaurant was still doing well, but we just felt it needed a change,” he told SLTN.
“It was looking tired.
“It had done really well for eight years, and we had touched it up over the last eight years to keep it looking good, but we decided to refurbish and give it an identity.
“We’ve always predominantly had a lot of seafood [on the menu] so the idea was to create a seafood bar and grill, which is something we had always wanted to do.
“The great thing about Samphire is that it is what you want it to be.
“If you want to go to a restaurant offering fresh seafood and grilled meats it is that, but it is also the kind of place you can sit at the bar and have a glass of wine and an oyster. It is, if you like, a hybrid oyster bar and restaurant where people feel immediately at ease.”
Renaissance Ecosse worked with Edinburgh-based architecture firm KBA&D on the project, which was carried out over a two-week period as the rest of the venue continued to trade.
Wilson said although the business decided to fund the project itself, the bank had been open to the idea of a loan.
“The banks are lending to people who can repay,” he said.
“If you’re borrowing money to pay wages they’re not going to lend you money, but if you’re borrowing to do something that has a definite return [it’s different]. But we didn’t have to do that. We funded it from our own cash flow.”
To coincide with the physical makeover, the menu has been revamped by head chef Graham Scott.
The launch of Samphire brings to £2 million the total spend by Renaissance Ecosse since it opened Orocco Pier in December 2003.