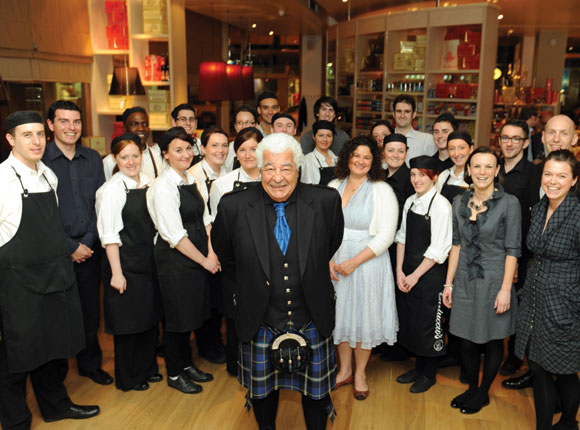 ITALIAN restaurant and deli group Carluccio’s has just launched its first venue in Scotland – and its boss promised it won’t be the last.

The group, established by celebrated chef Antonio Carluccio but now in private hands, chose Glasgow for its first ‘tartan’ venture last month.
Based in a former branch of the HSBC bank, on the corner of West Nile Street and Drury Lane, the venue brings Carluccio’s trademark restaurant, food shop and delicatessen together under one roof, with breakfast, lunch, dinner and drinks offered during the course of a day.
Retail is as important to the offer as hospitality, though, and its range of traditional Italian products is expected to be a big draw for ‘foodies’ in the city.
Chief executive Simon Kossoff told SLTN that Scotland had been on the group’s radar for the past 18 months.
“It’s taken since then to find a specific location, do the deal and then three or four months to do the build,” he said.
“I do think of the Scottish cities that Glasgow’s the best in terms of potential, but we would have opened in Edinburgh or Aberdeen if a site had come up first.
“I’m hoping we’ll have Carluccio’s in Edinburgh, hoping we’ll have Carluccio’s in Aberdeen and I don’t rule out the possibility of having more than one store in those cities.”
A Scottish contractor, Dimensions, was commissioned to handle the refit, with the project’s total cost put by Kossoff at around £750,000.
“The design has moved on from anything we’ve got anywhere else – we’ve got much more of a split bar and shop offer, so people really can come here and have a glass of beer or wine after work or before eating,” Kossoff said.
Despite the celebrity name on the door, Kossoff insisted Glasgow diners should find the prices amenable at Carluccio’s.
Lunch customers normally spend around £10-£12, while the cost for an evening meal is rarely more than £20, he said.
Carluccio’s in Glasgow is the 56th in the group and its CEO said he can envisage growing the estate to 150.
The business has been privately owned since its acquisition by its franchise partner in the Middle East, where there are three Carluccio’s outlets. Antonio Carluccio, now a consultant to the group, sold his stake in the business in 2005.