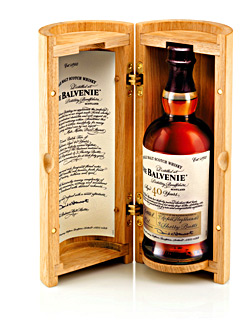 SPEYSIDE distillery The Balvenie has just released what it describes as its rarest expression: The Balvenie Forty.

Only 18 of the bottles will be released in the UK through specialist retailers, priced at £2500 each.
The liquid itself has been taken from six different casks that have been matured for forty years, each hand-picked by The Balvenie master distiller David Stewart. Three of the casks are sherry butts and three are refill hogsheads.
The Balvenie Forty is described as having rich, floral notes and a taste of sweet vanilla, cinnamon, nutmeg and oak, combined with butter toffee.
Dr Andrew Forrester, UK brand ambassador for The Balvenie, which is part of the William Grant & Sons stable, said the reaction from high-end on-trade establishments has been “really encouraging”.
“They’re going to be fairly exclusive on-trade outlets [that buy it],” Forrester told SLTN. “There’s only 18 bottles to sell within the UK market and they could very easily be snapped up by the independent specialists and sold to collectors.
“It’s actually a challenge to have sufficient (bottles) for the level of interest.”
Forrester said several bars in London are expected to stock The Balvenie Forty in the near future. 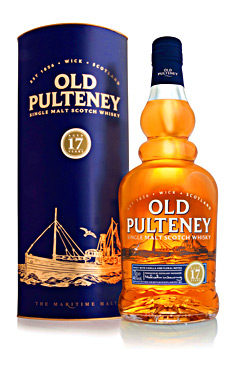 Meanwhile, the most northerly distillery on the Scottish mainland, Old Pulteney, has refreshed the design of its entire range. The new look runs across the distillery’s 12, 17 and 21 year old expressions.
The design features a new logo, greater use of foil and bolder lettering as well as a re-drawing of the traditional herring drifter that has become a symbol for the Old Pulteney brand.
Margaret Mary Clarke, senior brand manager for Old Pulteney, said the re-design “will bring greater visibility and appeal, providing a contemporary edge that continues to communicate our whisky’s quality and rich heritage”.
Old Pulteney 21 year old was recently named ‘world whisky of the year’ in the 2012 edition of Jim Murray’s Whisky Bible.