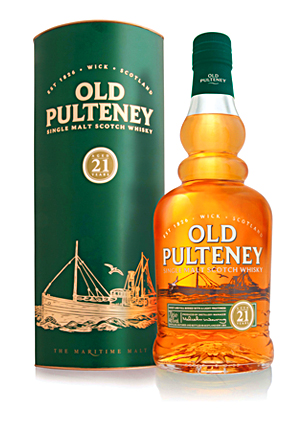 BARTENDERS looking for some inspiration this Christmas could do worse than take a look at the new edition of Jim Murray’s Whisky Bible.

The latest edition of the annual book features 4500 tasting notes and has seen whisky specialist Murray sample 1200 new whiskies, as well as re-tasting thousands of others.
The book includes winners in a number of different categories.
Inver House Distillers’ Old Pulteney 21 year old was named the world’s best whisky, with the whisky made in Scotland’s most northerly mainland distillery also taking the best Scotch whisky, best single malt (multiple casks) and best single malt 16-21 years (multiple cask) accolades.
Murray said he was “amazed” by the 21 year old malt.
“I first went to Pulteney nearly 25 years ago and I have never known them to produce anything other than top rate malt,” he said.
“Owned by a relatively small company, without the financial muscle of the major whisky barons to market their malts on the global stage, I hope that this award helps Pulteney to become better known around the world; that is the whole point of my Whisky Bible, after all.”
Margaret Mary Clarke, senior brand manager for Old Pulteney, said it’s “an enormous honour” to have won the four awards.
“This is one of the most prestigious accolades a whisky can receive, and we are delighted that our distillery and the Old Pulteney team have been recognised for our passion and depth of expertise in the art of whisky creation,” she said.
It’s not only Scotch whisky Murray celebrates, however. US bourbons George T Stagg and Parker’s Heritage Collection Wheated Mash Bill Bourbon aged 10 years were named the world’s second and third best whiskies respectively.
Elsewhere, Highland Park’s Scott’s Selection 1981 was named single malt of the year (single cask); Ballantine’s 17 year old was named Scotch blend of the year and Johnnie Walker Green Label 15 year old earned the accolade of Scotch vatted malt of the year.
Glenmorangie Sonnalta PX, part of the distillery’s Private Edition range, was named the best single malt in the no age statement (multiple casks) category.
“This is a wonderful award for us and is testament to the decision we took to launch our Private Edition,” said Dr Bill Lumsden, head of distilling and whisky creation at The Glenmorangie Company.
“Glenmorangie Sonnalta PX is an extraordinarily rich, dark and absorbing malt whisky and is the first of a series of innovative whiskies we decided to bring out for the true connoisseur.
“It is a real trailblazer and sets the benchmark for our Private Edition.”
Other winners included Benromach, whose 30 year old expression was named the best single malt 28-34 years (multiple casks). “More people across the globe are adopting whisky as their drink of choice as they actively seek out high quality, desirable items that have a unique appeal,” said David Urquhart, joint managing director of parent company Gordon & MacPhail.
“Consumers are becoming increasingly aware of Benromach and being recognised by the Whisky Bible 2012 can only boost our success over the coming year.”
Jim Murray’s Whisky Bible 2012 is out now, priced £12.99.

Taking on the world one rum at a time

Telling a tale of bartending