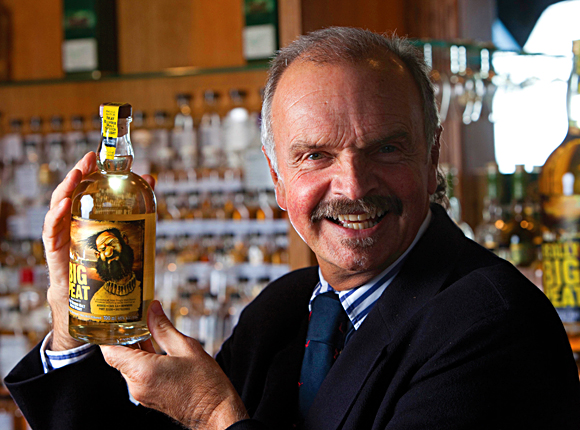 GLASGOW-based whisky blender and bottler Douglas Laing & Co has exceeded its own trading expectations with its latest set of financial results.

The family-owned firm, which supplies a range of whiskies to markets around the world, including its Big Peat blended Islay malt and flagship range of Old Malt Cask single malt bottlings, last week reported a higher than expected rise in turnover and pre-tax profits for the year ended March 31, 2011. Turnover rose by 5% to £5 million, exceeding by some way the projected figure of £4.7m, with profits before tax of £1.23m – an increase of £948,000 on the year before.
Speaking to SLTN last week, Fred Laing, who runs the firm with his brother Stewart, said that while sales had been “static” in the UK compared to the previous year, it was a pleasing result in the current climate.
Stockists in Scotland include retailers The Whisky Shop group, Royal Mile Whiskies, Robbie’s Drams in Ayr and Tam’s Drams in Glasgow, as well as WoodWinters, the Bridge of Allan wholesaler.
“It’s fair to say the UK high street took a bit of a bite last year,” he said. “We were very pleased we didn’t fall back.
“Our UK sales director is very aggressive in the field and knows he’s had to run faster to stand still just now.
“He continues to open up some really good accounts, which are compensating for some of the fall off in some of the other accounts.
“We believe, come the good times again, with the extra accounts that have been opened up in Scotland and in England, it will do us a lot of good.”
While the UK, which accounts for 12% in case volume terms, remains flat, progress is being made in markets more further afield.
“We’re seeing compensating markets opening up beyond Europe,” Laing said.
“Although it was a good year for France and Germany in 2010, we can already see them tailing off in 2011; it’s the same with Switzerland and Russia.
“Fortunately, [this is] compensated by markets like Vietnam, Malaysia and Indonesia.
“We [also] have what you would call stalwart markets in Japan and the USA. Japan is meant to have been in recession for 12 years but we regularly fly air freight out there such is the demand to be kept up to date with the latest releases.”
Some markets are not offering the same potential to Douglas Laing as they are to much bigger companies, however. Laing said the so-called BRIC countries (Brazil, Russia, India, China) “have not been kind to us”.
“I don’t see Brazil taking specialist malts,” he said.
“And because we’re not distillers ourselves, our blend prices are not as competitive as the big guys can be.
“The big guys also parachute their own companies into these markets to manage and monitor sales in Brazil, Venezuela, Panama, wherever.
“We cannot do that – we’re a tight little team of 26 and the two owner directors are in among the sales and marketing team.”
More generally, Laing said the company was pleased to be “riding the coat tails” of the wider success of the Scotch whisky industry, stating that the firm’s ability to move quickly and respond to gaps in the market for niche products was serving it well.
That the company also holds some valuable stocks – it invests in the filling programmes of the major distillers where it can – is also seen as a major asset in protecting its future interests and its ability to bring new whiskies quickly to market.
“Some markets are performing better than others and some brands are performing better than others, but yes it was undoubtedly a better year than we anticipated,” Laing said.
“But you saw the words of caution I used [in the results] – I think it’s always better and healthy to expect troubles ahead than be absolutely gung-ho and bullish.
“There are undoubtedly markets that are going to hurt our whiskies and us over the coming months.
“I reckon we’ve still got another tough six months ahead of us.”