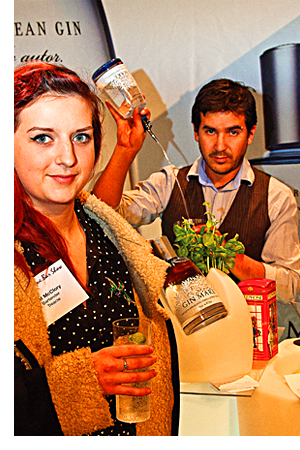 THE second annual Boutique Bar Show, held in Edinburgh last week, has been hailed a success after attracting more visitors than the inaugural event.

Organiser Andrew Scutts, who also stages annual Boutique shows in London and Manchester, told SLTN that attendance was 20% up this year, compared to the 2010 event.
This year’s event, held again at Mansfield Traquair, also welcomed more exhibitors than last year.
“Last year we had 29 brands. This year I had 34, so I was at capacity,” Scutts said.
“It was quite nice to see a few of the local companies there, like Spencerfield Spirits.
“Bruichladdich was there, and Whyte and Mackay was there with Dalmore. It was nice to see some new companies at the Edinburgh show that hadn’t done the other ones.”
Also exhibiting at the show was distributor Love Drinks.
The company’s Kirsty Loveday said: “This is our second time at the Boutique Bar Show Edinburgh, we felt it was very important to attend in order to make new contacts within the industry in such an important area.
“The quality of visitors did not disappoint – in fact we were hugely impressed with the broad range of visitors making the effort to come along.”
In addition to the exhibition stands, the show also featured talks by international bartender Tony Conigliaro and mixologist Stanislav Vadrna, as well as a business seminar for aspiring bar owners, titled ‘from bartender to bar owner’.
The event also featured the second annual Great Scottish Shake-off, which saw teams of bartenders from Edinburgh, Glasgow, Aberdeen and Newcastle compete in a number of different cocktail making challenges.
The Glasgow team, captained by David Smiley of Blythswood Square, emerged as this year’s champions.
Scutts said the event has now become an established date on the Scottish drinks calendar.
“I would go as far as to say that it’s the only show I know of in Scotland that does what Boutique does, which is focus on high-end drinks brands with a heavy cocktail orientation, which is perfect for the number and quality of bars you find in Edinburgh, Glasgow, St Andrews and Aberdeen,” he said.
“If you look at where the growth in the market is, it’s definitely in the higher end, cocktail-style bars.

The quality of visitors did not disappoint – in fact, we were hugely impressed with the broad range.

“Boutique perfectly caters for that market.”
Scutts said the success of the Scottish show has encouraged him to introduce more events for the trade north of the border.
“One of the things I’d like to do is to hold events outside of the show itself,” he said.
“The database is growing and it would be nice to give people opportunities throughout the year.”