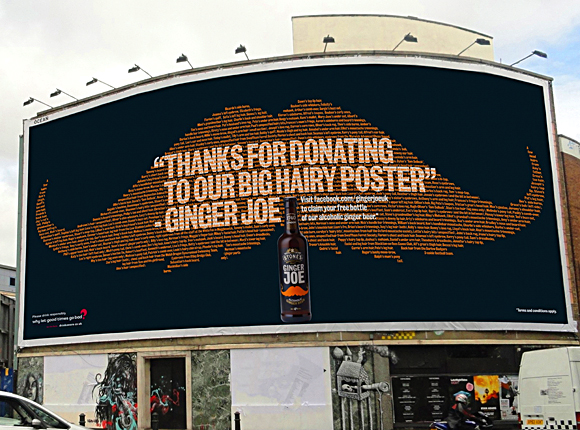 STONE’S, the ginger wine brand owned by Accolade Wines, is investing a claimed £2 million on a new ad campaign for its Ginger Joe alcoholic ginger beer.

Following consumer-facing activity in the summer, Ginger Joe will be the focus of a national print and online campaign that includes a new Facebook app.
The Ginger Joe moustache takes centre stage in the promotion, with the Facebook app allowing consumers to ‘tache’ themselves and their friends.
“Our market research shows that consumers love Ginger Joe,” said Neil Anderson, marketing controller at Accolade Wines.
“They enjoy the premium, bold and distinctive packaging, plus the authentic ginger beer taste that is less sweet than other popular ginger beers currently available, and that is why we’ve seen growth across distribution channels since the launch.
“Ginger Joe appeals to both male and female groups and launching this new campaign focusing on the fun iconic ‘tache imagery of the brand will drive sales and trial with the 20 to 30 year old target audience.”
Ginger Joe is named after ‘Ginger’ Joseph Stone, the London greengrocer who launched the Stone’s brand in the 18th century.
Meanwhile, fellow Accolade brand Hardys has been confirmed as a sponsor of high profile consumer events MasterChef Live and the BBC Good Food Show.
The wine brand has been signed as the sponsor of the MasterChef Restaurant Experience and bar, which will be present at each of the shows.
The Restaurant Experience will see Hardys served alongside menus prepared by a number of Michelin starred chefs.
Hardys also has a stand at the shows, where Master of Wine Philip Goodbrand will host a series of food and wine tastings. The BBC Good Food Show Scotland took place in Glasgow last month, with the MasterChef Live and BBC Good Food Show Winter taking place in London and Birmingham later this month.
Other exhibitors at the Birmingham event will include Bottle Green, which will showcase two of its wine brands: Blue Nun and Andrew Peace Wines.
Visitors to the show will be able to taste the wines in each range, as well as have the opportunity to purchase them at special show prices.