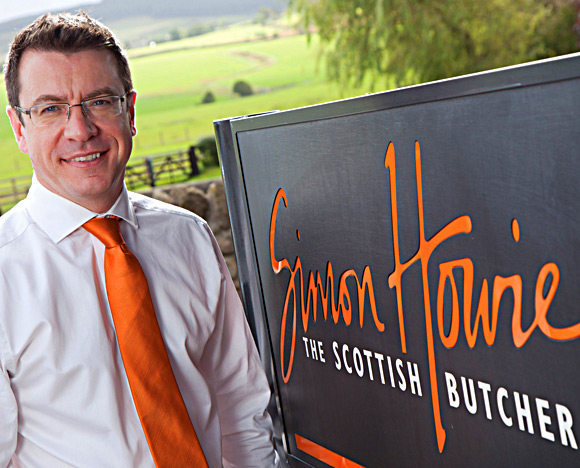 IF you’ve ever enjoyed a cooked breakfast in a top class Scottish hotel, or feasted on beef in one of the country’s best-quoted restaurants, the chances are the meat will have been supplied by Simon Howie.

The Dunning-based butcher, whose produce is sourced from specialist beef herds in Scotland, enjoys relationships with such high profile establishments as Gleneagles that stretch back years.
In recent years the firm has seen sales grow in the foodservice arena as it’s enhanced its focus on the restaurant trade.
But as the firm’s new managing director, Andrew Staal, explained last week, the butcher is having to work a little more creatively with chefs as economic uncertainty continues to influence how much consumers are prepared to spend on a meal out of home.
“You look at a meal and a big component of a meal cost is meat,” said Staal, who joined Simon Howie Foods from Associated British Foods just over two months ago.

I wanted to come back to the UK and a fresh challenge. When I met Simon I was very impressed.

“One of the things we’ve seen over recent months is a trend towards looking at different parts of an animal and getting cuts that are still really tasty, but offer a more economic solution.
“The guys here (Simon Howie’s 100-strong team at Dunning includes many butchers and chefs) have got the expertise to solve some of the problems chefs are facing as they try and get a price point on a menu or something a little bit different. We’ve been able to benefit from that.”
Consumers, of course, are not only motivated by budget: diners need more than a price incentive to be persuaded to try different cuts. For Staal, the trick for butchers and chefs is to come up with meat-based recipes that are tasty while providing value for money.
“Like anything, it’s about delivery of the end product,” he said.
“If you’ve got a product that’s been designed well with good, complementary flavours for the meat involved and it’s positioned well on the menu, then I think people are willing to try to be a bit more adventurous, particularly if you can deliver it at an attractive price.”
Staal’s arrival at Simon Howie coincides with the firm assessing its strategy for its three main trading areas: restaurants, major supermarkets and its own retail outlets.
That review could see the firm add to its own portfolio of stores, though at this stage “nothing’s ruled in and nothing’s ruled out”.
Staal described the stores, at Auchterarder and Perth, as a great shop window for the company.
“One thing we’ve seen quite a lot of interest in in our retail shops is our £10 goody bag, which is all about driving traffic and getting people who wouldn’t normally be comfortable walking into a butcher’s shop to come in and try some of the products on offer,” he said.
“We’ve had tremendous success with that over the past three or four months, with a big Facebook campaign to back it up.”
Staal came to Simon Howie after 15 years working on Patak’s Indian foods, which was acquired by Associated British Foods in 2007, in a range of operational roles in the UK and markets overseas.
With his most recent post in Sydney, Australia, where he set up a new business for ABF, the move to Simon Howie has brought a radical change to his working environment.
But he said it’s been the right move at the right time.
“I wanted to come back to the UK and wanted a fresh challenge,” he said.
“And when I met Simon I was really impressed with what was going on here at Dunning and thought maybe I could bring some of my skills and experience from my life in blue chip business to a small but really dynamic place here, with great people and really great products as well.
“I don’t know if you’ve personally tried our bacon, but it really does knock your socks off!”
Going forward, Staal sees enormous potential for the Simon Howie brand, believing there’s a “great opportunity” for innovation and broadening its product portfolio. Its approach to supplying retailers does differ slightly to its foodservice strategy, though.
“In retail there’s an opportunity for us to understand our consumer more and tailor some solutions to what are evolving needs, whether it be health or price – that is an area of major focus for us,” he explained.
“We’re probably a little more reactive on the restaurant side, in the sense that nobody knows their own business better than a chef.
“While we think we’re in a good position to offer suggestions and solutions and menu ideas, and work with chefs to get a meal to a price point, we’re not going to walk in and offer a homogenised answer across the whole of the Scottish restaurant trade.

We’ve got the expertise to solve some of the problems chefs are facing.

“Chefs are very passionate about what they want to do, they know their own consumers and a lot of chefs we find like to innovate and own what goes on the menu – their reputation depends on that. We play more of a supporting role in that sense, and a proactive one in the retail space.”
As for his own vision for the business, Staal wants Simon Howie to be “up there” with Scotland’s greatest food and drink exports, rhyming off names like Walkers Shortbread, Highland Spring and Irn-Bru.
“I came here because I saw a business which has great heritage and prominence, some really good people and some fantastic products,” he said.
“I also saw a business that had opportunity to grow further.
“My real vision is to see Simon Howie up there with those kind of brands.
“The reputation for Scottish meat is excellent outside of Scotland.
“As a business, we think we add real value and deliver some excellent products for the consumer.
“I’ll be focusing on realising that potential so that consumers in England, Wales, Ireland and further afield get to know and appreciate the Simon Howie brand and our products.”

EMPLOYING almost 400 staff across a range of sectors, including property, distribution and farming, the wider Simon Howie Group has a turnover in excess of £40 million.