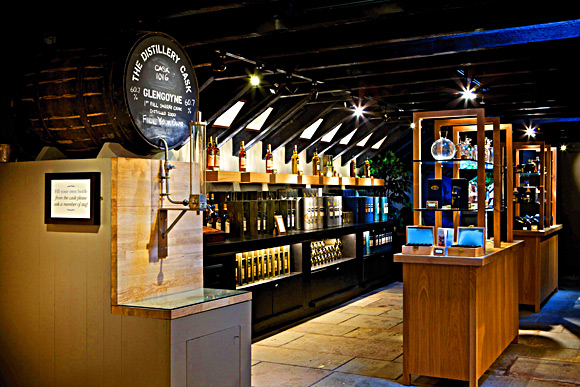 IF your bar sells Glengoyne single malt, why not buy your Christmas stock from the distillery itself? It would certainly seem to be a pleasant way to indulge in some festive shopping.

Scotland’s most southerly Highland distillery has just held the official opening of its revamped shop and visitor centre, boosting the already impressive consumer and corporate facilities at the Dumgoyne site.
New features at the shop, which remains based in the distillery’s oldest warehouse, include a new tasting area and the chance to ‘pour your own dram’: visitors can fill and label their own bottle direct from an exclusive single cask, before registering it in the customs book. Currently on offer is cask number 1016 – an American oak first fill ‘hoggie’ from 2006 – which is available for £75 a bottle.
The enhanced retail experience extends to a new bothy area, offering visitors a place to relax before and after tours, while elsewhere in the distillery further warehousing has been added and upgrades made to the still house and the mash tun; some £2.5 million has been spent on operational changes to the distillery over the past two years.
The £300,000 spent on visitor facilities this year, with the promise of more to come, builds on the £200,000 spent revamping the former manager’s house (now an events space) in 2007.
Iain Weir, marketing director of owner Ian Macleod Distillers, told SLTN the firm is delighted with the new-look shop.
“It’s very much still in keeping with the character of the oldest warehouse on site, which is where the shop is,” he told SLTN. “We’ve very much updated the fixtures and fittings – they’re all solid oak now – and there just seems to be a lot more space in the shop; there’s a better flow and the bottles are far better displayed.
“It’s the way we’ve wanted to have the shop for a number of years.
“The great thing is that it’s reflected in the sales – consumers seem to like the new layout which is great.”
And it seems people are flocking to Glengoyne like never before.
Weir revealed visitor numbers are up 6% on last year to date, meaning that by the end of the summer season some 48,500 tourists, malt fans and corporate delegates had been through the doors. The favourable exchange rate may have helped boost numbers from overseas, Weir acknowledged, though he said it was important not to “underestimate” the quality of Glengoyne’s staff, tours and the attraction of the distillery itself.
“With higher shop sales and higher visitor numbers, it’s all very positive for Glengoyne,” Weir said. “In this particular economic climate that’s doubly good news.”
The new facilities were officially launched earlier this month, where Ian Macleod Distillers also showcased new promotional films, designed to offer a fun and informative way for visitors to learn more about Glengoyne.