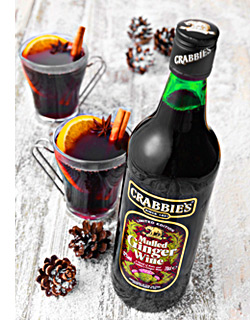 HALEWOOD International is expanding its Crabbie’s range of ginger-flavoured drinks this Christmas with the introduction of Crabbie’s Mulled Ginger Wine.

Positioned as an alternative to traditional mulled wine, the Crabbie’s product was originally trialled last year as a limited edition variant. The 12% ABV mulled wine is made from a blend of ruby wine, ginger, cinnamon, cloves and citrus fruits, and will be available in 70cl bottles both in the on-trade and take home sectors.
“Crabbie’s Mulled Ginger Wine provides consumers with a recognisable branded festive choice,” said Richard Clark, director of innovation at Halewood International.
“Our limited edition last year demonstrated the appetite for this product, which is now being rolled out as part of the wider innovation strategy for Halewood International, amongst our consumers .
“The ginger spice twist differentiates it from other products available on the market.”
According to Halewood, Crabbie’s Mulled Ginger Wine should ideally be served warm and in a tall glass, with cinnamon sticks and citrus peel to garnish, though the company has also suggested it works well in desserts by pouring it over mince pies.
Halewood has confirmed that Crabbie’s Mulled Ginger Wine will be distributed across the UK throughout the winter months. In the take home sector, where the product has a recommended retail price of £4.99, listings include Tesco and Morrisons. It’s also available from Booker cash and carry.
Halewood has invested heavily in the Crabbie’s brand this year. The introduction of Crabbie’s Mulled Ginger wine follows the recent launch of Crabbie’s Black, a 6% ABV version of its Crabbie’s Alcoholic Ginger Beer.
The oak-matured drink was launched in August with a stronger, more complex taste than the traditional Crabbie’s Alcoholic Ginger Beer.