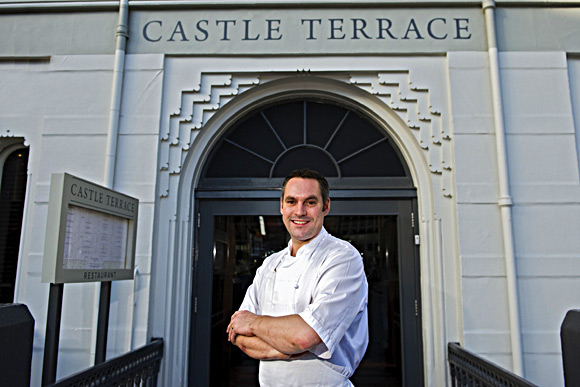 THREE Scottish restaurants were among the newest venues to receive stars from Michelin when the 2012 guide was published earlier this month.

Castle Terrace in Edinburgh, Glenapp Castle at Ballantrae and Martin Wishart at Loch Lomond gained the honours in the latest edition of the annual guide to the UK and Ireland’s top restaurants, which was published three months earlier than usual.
For Glenapp, the Michelin star comes after the hotel received four AA Rosettes last month for its dining facilities, while Castle Terrace’s award follows a ‘rising star’ commendation in the 2011 Michelin Guide.
Dominic Jack, who opened Castle Terrace with fellow chef Tom Kitchin last year, said the star had been hard-earned.
“It’s huge, because everyone’s working very hard,” he said.
“Just to get that recognition is great for the team – and they deserve it.
“Everyone’s been working like mad for the last fourteen months, so it’s fantastic.”
Martin Wishart became the only Scottish chef to hold Michelin stars for two properties, gaining a star for Martin Wishart at Loch Lomond while retaining the star for Restaurant Martin Wishart in Leith.
Wishart said he was “extremely happy” with the new award.
There are now 16 venues in Scotland with Michelin stars, including Andrew Fairlie at Gleneagles, which is the only Scottish restaurant to have two Michelin stars.
Other Scottish restaurants to have retained their Michelin stars for 2012 include Number One at the Balmoral Hotel, Kinloch Lodge on Skye, Braidwoods in Dalry and Knockinaam Lodge in Portpatrick.
But the new guide did not bring good news for everyone.
The Plumed Horse in Edinburgh and the Champany Inn in Linlithgow both lost their stars while Glasgow has now reportedly failed to secure a Michelin star since 2003.
However, Glasgow restaurant Stravaigin did achieve the Bib Gourmand rating for offering exceptional value for money.
The guide also proved memorable for Graeme Pallister and Scott and Penny Edwards – the team behind Perth restaurants 63 Tay Street, No 1 The Bank and 63@Parklands.
The venues represented for three of the four in Perth to be listed in the 2012 guide.