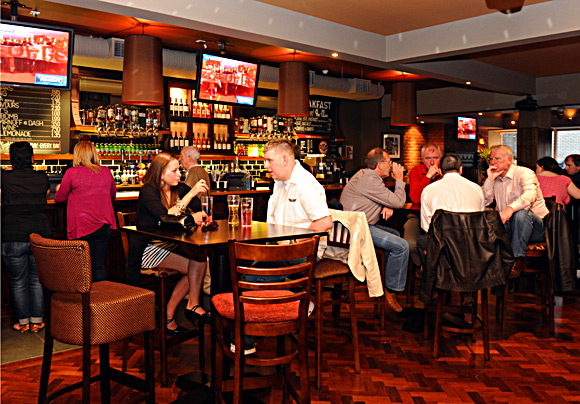 OPERATORS told SLTN last week they are optimistic about Christmas 2011, as the trade braces itself for the onset of the silly season.

With just under two months to go, SLTN spoke to three operators to see how they are preparing for this year’s festive season.
And despite their different approaches to festive trading, each said they expect the festive season to be strong for their business.
Pub group Barracuda has taken the long-view when it comes to this Christmas, having started developing its offer in February and taken its first bookings in the summer, offering a 25% discount to early customers.
The company, which operates 13 pubs in Scotland, is holding a range of themed parties in its pubs, such as a masquerade ball and a winter wonderland, and has been marketing its packages to businesses near each of its sites.
The group’s head of marketing, Myles Doran, said bookings to date are double those of last year.
Doran said value is still the main selling point for Christmas customers, but explained this doesn’t necessarily mean low prices.
“We’ve actually put our prices up year on year, which might sound odd, but what we’re over-delivering on is atmosphere and experience,” he said.
“We’ve improved the quality of the food, we’re putting more into surroundings – we’ve invested in our estate so that the actual environments are much more improved than what they were last year.
“The product is good and the staff are better trained. We’ve done all the basics right, which we feel deserves a higher spend per head.”
In fact, Doran argued a certain price can be reassuring to customers when it comes to festive parties.
“It’s a funny thing, Christmas. You can only price point Christmas to a degree,” he said.
“You get to a certain level where if it’s too cheap customers are suspicious of the quality. But I think if you reach a happy medium, where it’s value for money but it’s not the cheapest, then people will give you a chance, and if you deliver then I think Christmas customers are generally very loyal.”
Loyalty from previous Christmas customers is not a factor that Glasgow’s Hotel Indigo will be able to count on this December, having opened earlier this year.
Like Barracuda, operator Chardon Management has targeted local businesses and hopes to establish Limelight, the hotel’s bar and restaurant, as a starting point for corporate Christmas parties.
Limelight is offering a range of set menus throughout the festive season, including a three-course Christmas lunch, a four-course Christmas Day menu, and a Hogmanay package that includes a three-course meal, overnight accommodation and brunch.
Lesley Morgan, revenue manager at Hotel Indigo, said the hotel is offering customers something a little different over Christmas, focusing on food rather than entertainment.
“It’s more for people that are looking for that dining experience over Christmas,” she said.
“To try and steer away from the traditional soup and turkey lunch, our chef wanted to create a more extensive menu for those people that are looking for something a bit different.”
Morgan said value is also a strong factor in the Limelight package.
“I think everybody’s looking to get the best value for their pound,” she said.
“A lot of places don’t fund their Christmas party nights so people understand that it’s coming out of individuals’ pockets now instead of a corporate budget.
“We certainly want to take that into consideration.”
Another new outlet, the Waterside bar and restaurant in Seamill, Ayrshire, is using tried and tested Christmas offers from its sister venues as it enters its first festive season.
The Waterside is owned by independent operator SimsInns, which also owns the nearby Gailes Hotel and Old Loans Inn.
Its Christmas offer includes set menus and several Christmas party nights, which include a three-course meal and a disco, as well as a Hogmanay Hoolie on December 31.
Operations director Gill Gallagher said that being a new face can be an advantage during the festive season.
“A lot of people want to try something new,” said Gallagher.
“When we opened the function suite at the Gailes we were over-subscribed with Christmas bookings.
“We actually had to stop taking people because we didn’t have the room.
“People are still wanting to go out these days, and I think in the area we’re opening there is very limited choice.
“That’s why people are so excited about having somewhere new but that is from an established local business, where people know what they’re going to get.”
Whether it’s the reassurance of an established operator, or the excitement of something new, it seems Scottish consumers will have plenty to choose from this Christmas.