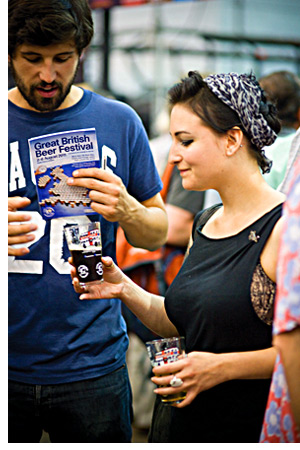 CASK ale continues to grow in popularity and can help provide a ‘lifeline’ for struggling pubs, according to the new industry report.

The latest Cask Report claims the growth of real ale in the on-trade in the last year means it now accounts for 15% of all pints sold in British pubs – up from 14.6% in 2010.
This growth is said to have been driven by the number of new drinkers attracted to the category, which includes a larger number of younger drinkers and women.
According to the report, which is written by Pete Brown and backed by the Campaign for Real Ale (CAMRA) and the Society of Independent Brewers (SIBA), as many as 7.8 million people in the UK now drink cask beer.
The number of 18 to 24 year olds drinking cask is steadily increasing (1.6 million drinkers under the age of 35) and the number of female consumers has doubled since 2008, claims the report.
“Cask ale can help pubs to not only survive, but to thrive,” said Pete Brown.
“It’s attracting new drinkers who spend more in the pub than non-cask drinkers, making them valuable customers.
“And, as our report reveals, cask is shaking off its historic ‘flat cap’ image and is instead seen by younger consumers as a ‘cool’ drink.
“This increasingly positive picture of cask can only be good news for the pubs who sell it.”
It’s a view shared by Mike Smith, manager at Bow Bar in Edinburgh, who told SLTN he has seen cask ale become more popular with younger drinkers.
“There are particular breweries that are going for that sort of market,” said Smith.
“At the moment Tempest, Fyne Ales, Darkstar and Brewdog are the popular ones with the younger crowd.
“Other breweries are going to have to rebrand themselves because there are younger people drinking them now.”
Smith said stronger, “hoppier” beers tend to be the ones most popular with younger ale drinkers in his pub.
“It’s the more interesting experimental beers that younger people are going with, but it’s mostly the big heavy single hopped beers that are quite popular with them,” he added.
The Cask Report suggests offering consumers a free trial of cask ale can help introduce them to the category, claiming 42% of people who have never drunk cask would do so if allowed to taste it first.
Stocking local beer is also said to be important to making the most of the category – the document recommends that any pub looking to build a cask offering should stock at least one locally brewed ale.
Meanwhile, CAMRA and Cask Marque have been encouraging publicans to hold cask ale events to attract more customers to the real ale category. National Cask Ale Week ran between October 1 and October 9 and saw a number of events taking place in pubs across the UK.