Consumers have more choice than ever, firms say 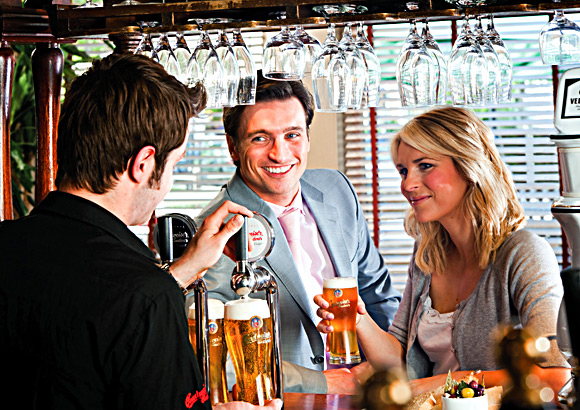 SCOTTISH consumers and operators are spoilt for choice these days when it comes to world beer.

Importers and suppliers say growing demand from both sides to broaden their beer repertoires means there’s a wealth of international brands vying for fridge space.
For operators, the range available provides an opportunity to give their outlet a point of difference over competitors.
“There is a strong trend, both in Scotland and beyond, for consumers to want to get back to interesting rather than bland global brands,” said Mark Todd, chief executive of KC Brands, which is importing Cambodian beer Kingdom to the UK.

You can have the most diverse range of beers in the world but if no one buys them, it’s a poor beer list.

“We see this in the USA with the rapid growth of craft beers and in the UK with the growth of microbrewers.
“Consumers are bored with the same old brands all the time.”
Gary Lawson, director of sales in Scotland at Branded Drinks, which imports Weihenstephan, Furstenberg and Krusovice to the UK, said world beers have had a major impact on the beer category as a whole.
“Gone are the days when someone walks into a bar and asks for ‘a pint of lager’,” he said.
“In my experience the origins and heritage of the imported beers are the main selling points when customers ask about your particular imported beer range.”
With such a wide range now available in the UK – and limited fridge space – choosing what to stock can be challenging.
Graham Archibald, senior national account manager at Morgenrot Group, whose imported beers include Alhambra and Cruzcampo, reckons there are a few simple steps operators should follow.
“First and foremost, a good beer list is not the one that looks prettiest on paper but the one which is most successful in generating sales,” he said.
“You can have the best, most diverse selection of beer styles and brands but if nobody buys them, it’s a poor beer list.
“The key to putting together a good beer list is choosing the right beers for your venue, your customers and the customers you want to attract and then ensuring that your staff are selling and serving these correctly.”
However, the firm behind Budweiser Budvar warned against taking the term ‘world beer’ at face value.
Jill Sutherland, who heads up Scottish operations for the Czech lager, said the term itself can be misleading as it covers such a wide range of different products.
“Budvar began life in the UK as a premium lager, since then it has become a niche beer, a discovery beer, a genuine imported beer, a foreign beer and now a world beer,” she said.
“The truth is that none of these labels are much more than a fashion statement. They tell neither retailers or consumers very much about what they are getting.”
Sutherland argued that the beer category overall needs to be re-defined to make it easier for consumers to differentiate locally-produced craft products from those that are brewed under licence by global companies.