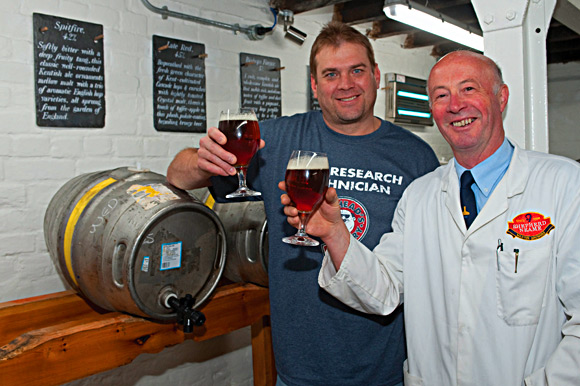 FIVE American cask-conditioned beers have been rolled out across JD Wetherspoon’s pub estate this month as part of its 19-day beer festival.

The five beers – Kalamazoo Black Silk from Bells Brewery in Michigan, Sandiago Session IPA (Stone, California), Cascadian Dark Ale (Bend, Oregon), Yakima Sun (Fat Head, Ohio) and Ninety Shilling (Odells, Colorado) – have all been brewed in the UK by their respective brewers
The American cask beers join 45 British brews, including The Governor from JW Lees, Ginger Beard (Wychwood), Horse Rustler (White Horse), Old Crafty Hen (Moreland), Pudding Porter (Tring), Vapour Trail (Salopian) and Brother Rabbit (Thornbridge).
The beers will be available in JD Wetherspoon pubs, along with tasting notes, until October 23, and customers can try any three of the beers in third-of-a-pint (schooner) glasses for the price of a pint.
JD Wetherspoon chief executive John Hutson said the range includes beers that have been brewed specifically for the festival, including new products and some that have been resurrected, as well as some speciality beers.
“The festival will give people the opportunity to enjoy a superb selection of American beers not usually available in the UK, as well as wonderful beers brewed closer to home,” he said.
“The festival promises to be great fun and I am certain that our customers will enjoy themselves.”