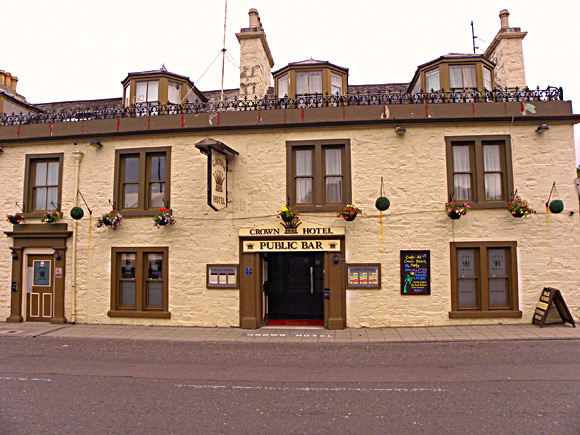 LATE night operators in Newton Stewart say business is being hammered thanks to a decision to shave an hour off permitted hours.

Pressure on police resources is understood to have driven the move by the Wigtown licensing board – one of four covering Dumfries and Galloway – to reset the terminal hour at 1am the south west town.
But by leaving hours unchanged in Stranraer, which is also covered by the Wigtown board, operators in Newton Stewart say they are haemorrhaging business to the neighbouring town.
Sinead Farrell runs three premises in the Newton Stewart area with husband Derek Hart, including The Crown Hotel in Newton Stewart itself, which previously traded till 2am. Farrell said the change in licensing hours has been disastrous for business.
“Because most of our customers are young adults – around the 25 mark – they are just going to Stranraer,” Farrell told SLTN. “Our takings are down 60% on Saturday nights.”
While the Crown Hotel is one of only two premises in the town that previously opened until 2am, Farrell said there has been a knock-on effect on other pubs, including the couple’s Bladnoch Inn and the Galloway Inn, in nearby Wigtown.
“We feel now that unemployment is going to start hitting,” said Farrell. “Derek and I can’t sustain the money that we’re putting into the premises to try and keep them afloat.
“We’ve pumped hundreds of thousands into the properties – now we’re looking at bankruptcy.”
Another Newton Stewart licensee said he had been forced to make several staff redundant, stating that the loss of business is having a “knock-on effect” across the town.
“There’ll be a hundred people every weekend that are going to Stranraer,” the licensee said.
“It’s taking them out of the pubs and hotels in Stranraer. It’s the jobs, the taxis, the carry-outs. It’s affecting everybody – not just the pubs.”
Peter Jeal, president of the Wigtownshire Chamber of Commerce, also hit out against the changes – and dismissed claims from one licensee that the move has been positive for the town.
Gordon Andrews, who runs the Galloway Arms Hotel and The Belted Galloway in Newton Stewart, as well as chairing the Newton Stewart Business Association, welcomed the change in the local press. He told local newspaper The Galloway Gazette that licensing hours in Newtown Stewart “have been out of step with other towns of a similar size for years”.
But following a meeting with local licensees in the town last week, Jeal said: “It’s clear that, on this issue, the chamber is speaking for the majority of licensees in the area, contrary to what has been suggested by Mr Andrews.”
Asked why it had cut hours in Newtown Stewart but not Stranraer, the Wigtown board cited concern over three of the licensing objectives: preventing crime and disorder, securing public safety and protecting children from harm. “These objectives do not include consideration of economic circumstances,” it said in statement. adding that the board will review the changes in November.