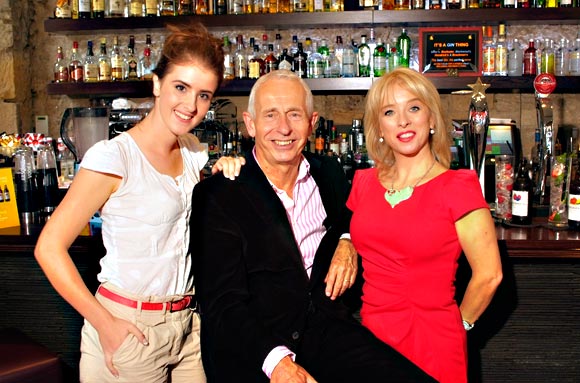 WHEN it comes to building brands in the on-trade, there’s often no substitute for experience.

Swedish cider Rekorderlig has enjoyed steady growth in the Scottish independent trade since distributor Chilli Marketing appointed seasoned drinks consultant Bob Taylor to work his magic 18 months ago.
Initially focusing his efforts on Glasgow, where the brand has been taken on in outlets such as Velvet Elvis, Cottiers, Brass Monkey and Firebird, Taylor has spread the word on Rekorderlig to the east. Independent multiple operators Signature Pubs and Montpeliers are among recent adopters, while listings have also been secured in St Andrews.
That Taylor, known as ‘uncle Bob’ to friends and contacts in the trade, is a well-kent face has undoubtedly helped the brand’s fortunes.
In a career spanning 35 years, Taylor has worked on numerous household brands. A 20-year spell at Bell’s preceded a successful venture as an agent and consultant, which has seen him work on everything from Tennent’s and Smirnoff to Magners and, now, Rekorderlig and Peruvian beer Cusquena, also distributed by Chilli Marketing.
And now Taylor is working in tandem with national account manager Fiona Brown (née Sweeney), who was appointed by Chilli after an 11-year stint selling Tiger Beer, the Rekorderlig operation in Scotland has a degree of experience, reliability and trustworthiness that’s hard to match.
“With us being so well-established in the trade, it’s great to work with a product consumers love,” Brown said.
However, both halves of this sales ‘dream team’ insist that the people behind a brand can only do so much.
They say it’s testament to the quality of Rekorderlig, which is owned ultimately by the Swedish brewer Abro, that it’s been able to shine in a market as competitive as packaged, fruit-flavoured cider.
“The brand entered a very congested market, but it’s clear that the consumer wants it,” Taylor said. “It’s a great product and it’s exciting to be involved with it.”
After initially targeting individual operators, the Chilli team has broadened its horizons to pitch to operators with portfolios of venues, again towards the quality end of the market. The product’s price, which varies between £2.95 and £4, reflects this strategy.
“We’ve been targeting groups and multiple operators since Fiona came on board, building on our existing database,” Taylor added.
“Signature came on board last year and we’ve since added Montpeliers; it’s a good base to start from [in Edinburgh]. When you’re building a discerning brand, you have to pick discerning outlets.
“Consumers who go to these kind of outlets don’t mind paying for a better product. Once we’re established we can then move more into the mainstream.”
Further growth is anticipated in the capital. Sarah Clarke, a recent marketing graduate from Strathclyde University, has just joined as business development executive, with a remit to build sales in Edinburgh. Consumer sampling is a key element to the sales process, allowing people to try the various flavours in the range and operators to make stocking decisions based on their reactions.
There are six flavours in the Rekorderlig range, including a winter variant that’s said to have gone down a storm last year. Served during the winter festival held in Glasgow’s George Square, where the brand was one of the sponsors, the vanilla and cinnamon-infused cider can be served warm, dispensed from urns, and cold. Big things are expected this winter, with the product available to operators through wholesalers like Wm Morton, Belhaven, Filshill, Dameck Drinks and WaverleyTBS from October 1.
Important though the winter variant is, it’s biggest seller is strawberry and lime, which is recommended served over ice with fresh mint, in branded glass.
Taylor said working with Rekorderlig and the owners of Chilli Marketing, Gareth Whittle and Kieron Barton, the latter now heading the business in Australia, is giving him great satisfaction at the veteran stage of his career. “If it wasn’t so good I would have retired!” he quipped.
“This product is a winner – big time.”