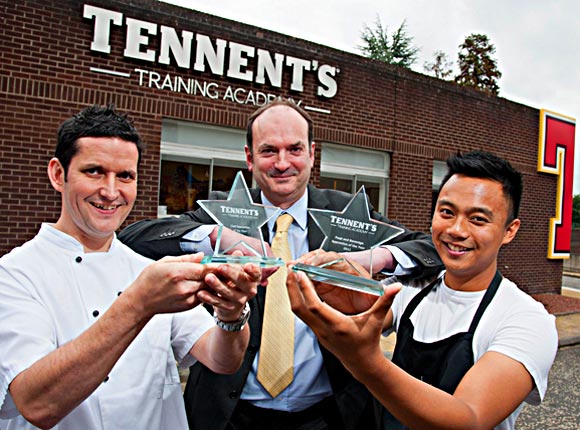 THE Tennent’s Training Academy has named its top two trainees after the organisation held its first Modern Apprenticeship of the Year Awards.
The awards, run in conjunction with Skills Development Scotland, were open to all of the students taking part in one of the academy’s Modern Apprenticeship Programmes, and saw trainees competing for the titles of Food and Beverage Apprentice of the Year and Modern Chef Apprentice of the Year.
The candidates were each required to complete a number of different culinary and customer service challenges before a panel of industry experts.
Glasgow’s Paul Hunter was named Modern Food and Beverage Apprentice of the Year, while Dumbarton’s Joe McGroaty took the Modern Chef Apprentice of the Year title.
Both can look forward to one-week work placements with leading licensed businesses.
Hunter is heading for a stint with hotelier Peter Taylor’s Town House Collection, while McGroaty is anticipating a week working for leading chef Martin Wishart at his Cameron House restaurant, Loch Lomond.
The winners were also presented with trophies, ‘goody bags’ and discount vouchers for future courses at the academy.
Tennent’s Training Academy director Alan Jones said both winners demonstrated “outstanding skill” on the day of the competition.
“The apprenticeship scheme is invaluable for those looking for the highest level of on-the-job training whilst working towards a qualification, and we hope that these awards will highlight the fantastic opportunities on offer for ambitious young people with the drive to make it in this exciting industry,” said Jones.
Hunter, a graduate of the academy’s City and Guilds Coffee Course and First Aid Course, said: “It’s so overwhelming to have been awarded this prize.
“I have been working in hospitality since I was 16 and love what I do.”
McGroaty said he was delighted to have emerged from such a tough field.
“Well done to everyone, the standard was excellent,” he said.
“I am so glad that I won, it was a very tough competition.”
Tennent’s opened the training academy at its Wellpark Brewery in Glasgow last November, having invested £1m in the state of the art facility.
As well as chef skills and coffee, courses cover subjects as diverse as wine and spirits, legislation, door security, whisky nosing and first aid. Tennent’s claims that hundreds of trainees have passed through the academy since November.
Last month the academy announced that it had established a presence in the Northern Isles through a partnership with wholesaler JW Gray.
The alliance has seen the Training Academy open two new satellite training centres within JW Gray depots on both Orkney and Shetland, providing a range of courses to the hospitality industry on the Isles. The new training centres welcomed their first trainees at the end of August.